Inside the Millenium Falcon (1) 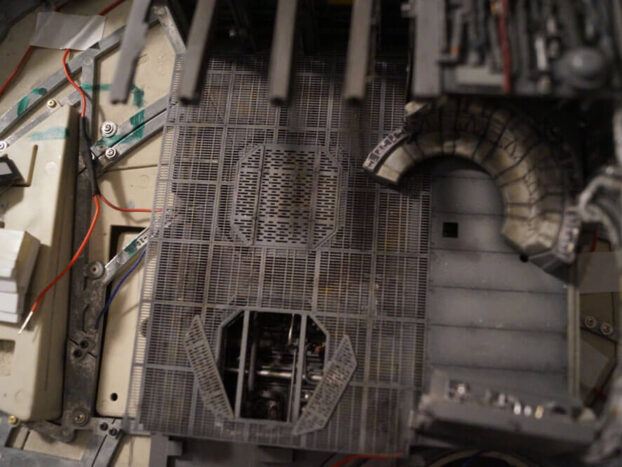 In this post, we go inside the Millenium Falcon. I’ll show you the beginning of the Millenium Falcon DeAgostini inner sections’ creation. I’m making all those section from scratch. The ship’s holds, the gun turrets, the corridors etc. The work is gigantic and Im’ going to be pushed on my limits.

I’ve already talked about the making of the external parts of the Millenium Falcon DeAgostini on several WIP posts and on a complet review here.

Inside the Millenium Falcon : the main hold

The main hold is certainly the better-known part of the Falcon after the cockpit. That’s where Luke is practicing lightsaber under the aegis of Obi Wan and where Chewbacca wins his Dejarik game against C-3PO.

The walls have been made from scratch and then molded in order to allow further copies. The ground is a photo-etched grid painted and damaged on purpose.

Every elements that required lightning have been equiped with LEDs. You can’t see them on the pictures because the stuff has not been connected to the main power source yet.

Let’s finish this post with a view of the maintenance well. Han Solo attempts to fix the hyperdrive system from here during his escape after the battle of Hoth.

I tried to include as many details as I could. This well must show the complexity of the Falcon machinery.

Many parts are still missing :

I discovered that I had to stop the making of the main parts until I make and install the “donut”, that is the main central corridor. I’m working on this part right now. Other picture af the main hold will come out when the “donut” is in place.

Posted on 11 February 2021 by petersteven in Work in progress