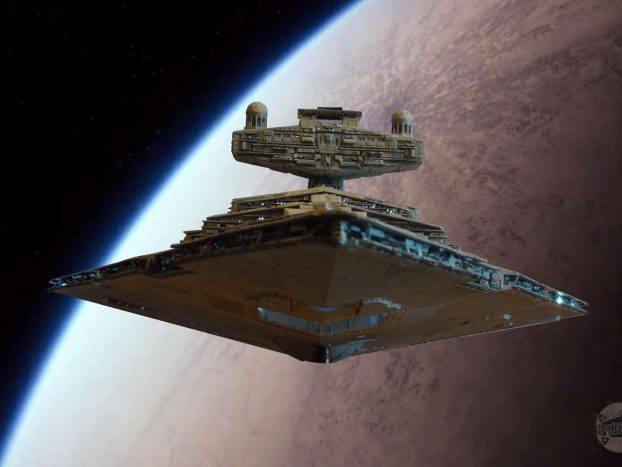 After finishing a model, I like to write an analysis of the ship’s design, when it’s possible. I’ve already published an assembly review of the imperial destroyer here and in the Work In Progress posts.

Two types of the project’s evolution that lead to the imperial destroyer as we know it can be distinguished : what I call the conceptual evolution, dated 1977, fruit of the work of the ILM model makers and illustrators and what I call an historical evolution that the prelogy and postlogy scriptwriters imagined from the original concept.

As is so often the case with the vehicules created for the Star Wars movies, what we see on secreen is not the original concept. All you have to do is watching the Ralph McQuarrie concepts to be aware of that.

The general structure is already there : the arrow-shaped hull, the main forecastle, the bottom hangar and the main thrusters (which are not seen here).

However, the forecastle is very different from the one we know. Much more massive, antennas everywhere, quite dissymetrical. It’s not arranged in tiers as it is on the final version. This concept seems to be inspired by the real aircraft carriers of ours. in adition, the ship seems to be a lot smaller, stockier, not aggressive enough, even a little unwieldy.

Another Cantwell’s concept seemed well on its way

The arrow-shaped hull is still here but top to tail. The rear of the ship is the head of the arrow. The rostrum emerging from the large part of the arrow is interesting : it will be seen again on the Acclamator and Venator class destroyers (see bellow).

Note the aircraft carrier function with small fighters going out from the arrow base. Far from the Tie fighters but the idea of a carrier ship is already here.

On the other hand, the antennas have completly been removed. Star Wars ships generally have no big antennas (except the Millenium Falcon of course).

Historical evolution of the imperial destroyer

What I call “historical evolution” is refrring to the three Star Wars trilogies history. It is commonly agreed that the prelogy has many flaws, but it has also some qualities. On my mind, on of its quality is the consistency of the ships, settings and costumes in comparison to the original trilogy. This point is obvious when you look at the design of the republican and imperial destroyers.

The triangular shape is well recognized. The forecastle is of course replaced by the cockpit and the rear thrusters are exactly at the same place than on the star destroyer.

Here is a 3D model found on Sketchfab so that you can figure out the exact shape of the ship. Note the two rear thrusters which are exactly at the same place than on the imperial destroyer.

At the end of the Attck of the Clones, we can see clone troopers disembark on the Geonosis planet from huge carrier ships : the Acclamator class destroyers. The resemblance to the Imperial one is obvious.

A new feature however : the rear rostrum, between the main thrusters. I like this idea, this reinforces the idea of an arrowhead, making it more agressive.

A little 3D model to figure out :

During the episode III, the Revenge oh the Sith, we discover the real first imperial destroyer : the Venator class destroyer. The Acclamator class was only an improved troup carrier, the Venator is clearly a combat ship and an amazing starfighter carrier.

This ship has a beautiful line. I made a model of it years ago, one day I’ll make a review of it.

The trianguar shape is a little modified with side recesses at the rear. These recesses includes two huge gates. The command forecastle is simplified and includes two bridges. The rear rostrum is still here, like on the Acclamator.

Contrary to every other Star Wars destroyers, the top edge conceal two huge gates allowing the main starfighters hangar access. They can be seen on this cross section picture :

I find this is a brillant idea, it allows the most “technical” scene of the episode II, when we see Obi Wan talking with his favorite clone Cody.

However, the thrusters are the most interesting feature of the ship. A genuine forest of thrusters of different size and diameter wich gives to the ship an incredible visual power.

At the end of the movie, we can see the imperial version of the ship, all grey colored. We are very close to the original trilogy imperial destroyer :

I’ve already talked too much about this ship (paintjob, light-up, optical fiber). Just a little 3D file from sketchfab to compare with the others ships of this post :

In 1980, the Empire strikes back shows us the biggest Star Wars trilogy ship : teh Executor. Always subtle in their naming choices, those imperials…

The global arrow shape is kept and even pronounced. The ship is very slender. It’s often told to be 19 km in length for 4 km in width.

The thrusters are set back under the hull comparing with the Imperial class but the global structure remains. Except for the size itself, nothing really new with this starship. Even the main command bridge is exactly the same as in the Imperial class.

Episodes 7 and 8 (and soon 9) show some first order ships wich also remind strongly the Imperial destroyer. I will be brief because everything can be summed up in two words : always bigger.

Indeed, the consept doesn’t really evolve : the arrow, the forecastle, the thrusters etc. I will only give you some pictures :

The “arrow collection” ends only with the Supremacy, the personnal Snoke’s ship, a huge flying wing :

Let’s say the arrow has been flattened…

At the time of writing, the episode 9 is not yet in theaters (in two weeks) but the first images show beyond doubt the return of the Jedi star destroyer concept…

This post is ending, thanks for having read it to the end and thanks for your attention to our work in general.

Posted on 2 December 2019 by petersteven in Analysis, Finished model