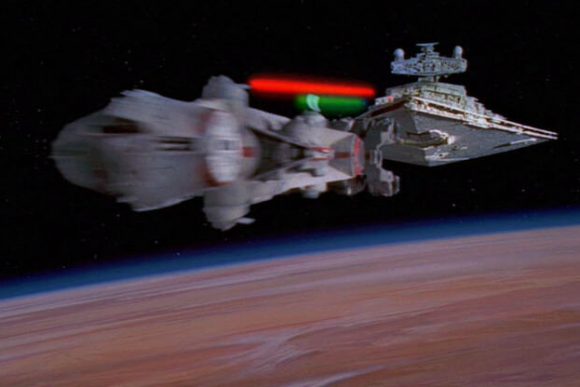 The princess Leia have ran away from the battle of Scarif after grabbing the Death Star plans. Fortunatly, she didn’t think mailing the plans to her rebel base. Otherwise, the film would have been over afetr only 5 minutes. So Darth Vader can chase her onboard the Devastator (they always have cute names in the Empire), his personnal imperial star destroyer. Technically, the Devastator is not the very forst ship ceen on screen (it’s the Leia’s Tantive IV) but it’s the most impressive.

Wow. It’s the first time in cinema history we see such a well filmed model. Even Kubrick in 2001 did not shoot so well his models. The imperial star destroyer go lengthily by the screen until we see the huge rear thrusters ; the level of detail is awsome. In my opinion, this scene (with the Trench Run) shows at what point George Lucas is an amazing filmmaker, it redeems all his later fails.

We see the imperial star destroyer again in a few others scenes, filler-scenes as the Death Star exposure or the beginning of the Falcon chase after the Tatooine escape. However, this openning scene gives the destroyer its best moment in the all saga.

The imperial star destroyer is used in the two other movies of the original trilogy. In the Empire strikes back, three are shown, chasing the Millenium Falcon (again) after the Hoth escape (again). Even if they are concealed by the Executor in this movie (litterally and figuratively), their screen time is much higher in this episode.

At last, as the spearhead of the imperial fleet (litterally and figuratively once again, due to its shape), it’s at the forefront af the battle of Endor during which we have all the time to contemplate it from every angle.

The ship is seen again in the two sin-pffs : Rogue One and Solo. 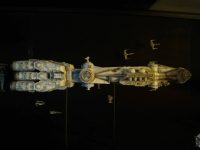 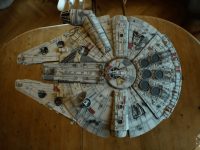 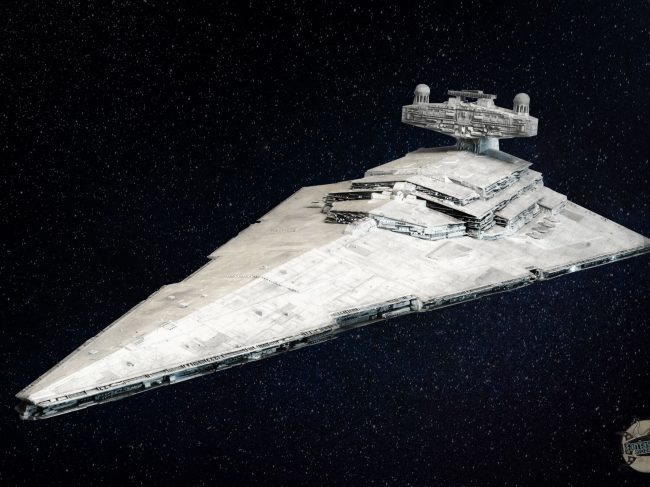 The kit is high-quality, the level of details is satisfactory. Just a small flaw, it seems that the kit is a mix between the different shooting models. Indeed, the model from A New Hope and the Empire’s ones are quite different. I will review those differences in a further post in the Analysis category.

At first sight, it can be imagined that the star destroyer hull is plain, all white (at least very very light grey). It’s not. We can see that on this picture of the shooting model from beneath :

Many grey panels sprinckles the surface. Panel lines are clearly visible. All oe this have been reproduced. I’ve already spoken of the paintjob technics in this previous article, I won’t do it again. Lets’ just say that succeed in painting a plain surface is probably one of the most difficult job in painting. When you have a colourful vessel like an X-Wing or an A-Wing, even a mediocre paintjob could do.

On this picture, you can see the bottom hull detail, near the main generator. I wanted a discret paneling only visible on slower looks. On the contrary when you take a faster look, when watching movies, you see the hull all-white (or grey).

The next two pictures show the upper hull, painted with the same technique. You be the judge.

Since many years , I have a dilemma. What I do is static scale modeling. That is, when I make a model, it’s like I make a photo of the original model. I’ve never alowed myself to make light flashings, thrusters ignitions, openning doors or rotating guns.

Last year, a client asked me to make the USS Enterprise NCC 1701-A from Star Trek. the specifications of the project included the use of a dynamic lighting kit. The customer is king so I had to do what I never did. And I have been convinced. At large scales, when no figurines are seen (which should move, so), it works really well.

So I learnt to use Arduino cards, which allow to realize those light-ups. In this article I explain how you can make a standard ship light-up with sequential sections lightning and thrusters ignition.

Here is a first video oh the lightning sequence :

If you go down the page, you’ll see a more complete video.

An amazing model, the best never produced of an imperial star destroyer. The old AMT is totally outclassed. The details aren’t always accurate but you have to make concessions with Star Wars modeling. The versions of one ship are too numerous. The assembly is easy, parts fit perfectly. There is a little work to hollow for the optical fiber passing.

However, a few sections are a little weaker like the bottom hangar and the main bridge which deserved a little more details.

All that stuff gave me the desire to make one for me, I own the Anigrand one wich waits since many years in its box…