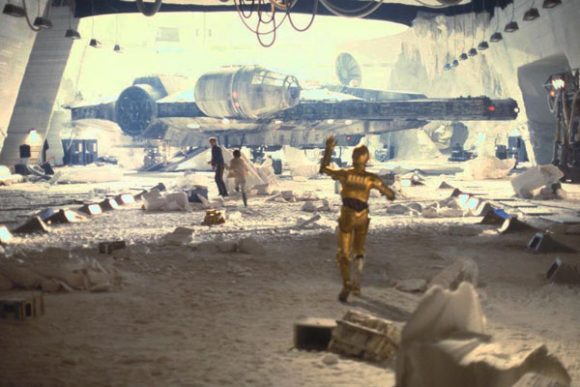 Who doesn’t know the Millenium Falcon ? I will tell you as if you didn’t, otherwise you will get bored. This mytical ship once owned by Han Solo, Lando Calrissian and many unsavory guys like Unnkar Plut has a complicated story. In the Star Wars saga, his first appearance occured in episode II – Attack of the Clone. You can, see her when Padmé and Anakin land on Naboo but it’s only an easter egg, she’s not part of the story.

The real first appearance is in Episode IV – A New Hope. And what an entry it is ! Luke Skywalker and Obi-Wan Kenobi, seeking a spaceship to their journey to Alderaan discover “a piece of junk” in the 94 hangar of Mos Eisley. It is interesting to notice a huge failure in this scene : the upper dish antenna is just missing ! The production had to save money in this first Star Wars and built only the half of the ship.

The Millenum Falcon was not just a cargo ship meant to transport passengers from a side of the galaxy to another. The ship was also engaged in major battles against the Empire. Let’s quote the Death Star escape during which four Tie fighters attacked the Falcon, the reversal of the situation at the very end of the battle of Yavin, the chase in the asteroid filed during The Empire strikes back, battle of Endor, the chase in the garbage dump of Jakku and finally the battle of Crait where the Falcon saved every one (20 fellows…) in the Resistance in The last Jedi.

Emblem of the saga, even more than the X-Wing or the stardestroyer, the Millenium Falcon flows on through the generations. Three generations of fans would recognize her with eyes closed since the saga began almost 40 years ago. 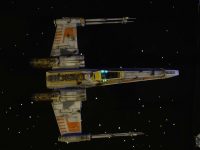 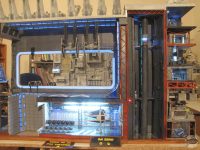 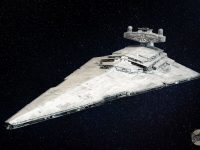 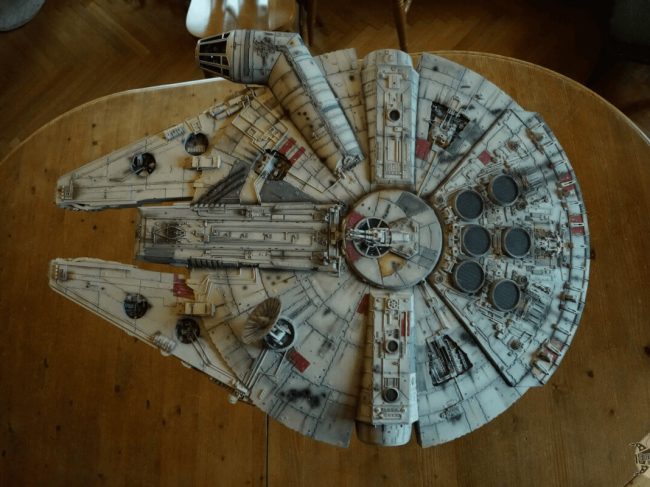 Contrary to what people may think, making a Millennium Falcon model is not very difficult. In addition to the pure technique, choices you have to do when you are making a model can make things much harder. A wrong choice can ruin an achievement. None of that for the Falcon, there are dozens of Millenum Falcon versions, you can feel free. The De Agostini Millennium Falcon is one of the Empire strikes back version, the main filming model.

One Millennium Falcon ? No, many.

Indeed, forget the concept of one unique Millenium Falcon when making this model even if the movies make people believe it’s the same ship all over the saga. You can count at least :

At least 9 versions for the original trilogy only. CGI versions seen in the remastered films in 1997 and on DVDs could also be added (at least 6 versions more). If you look at episode VII and VII, you can add many sets, models and CGI to final count. My estimation revolves round 20 versions each with its own specific characteristics, details even global form.

Different versions of the Millennium Falcon in Empire strikes back

This model was sold as the main filming model replica from Empire strikes back. My researches on the pictures of the filming model led to the conclusion it is totally accurate. In France, the price of the model seems to be far too expensive (almost 1500 $) but it’s not, the price is totally justified by the accuracy and numbers of parts. The best Falcon model ever (and for long). It surpasses even the Master Replica, same sized, which coasts more than 3500 $. Huge yet reasonable investment, so far as the adjective “reasonable” can make sense when you do model making…

Due to the business model of De Agostini, it was not possible for them to provide a hull made of only one part as Finemolds or Bandaï do. Indeed, De Agostini sells pieces weekly using newsagents, it took 100 issues to complete the model. A metallic structure supports the all model. On this structures, resin panels are screwed, as if you were playing a puzzle.

Contrary to what the instructions recommended, I did not definitively close the model. The top hull just lays on the bottom allowing to see the ship interior. There is not much to see for now but in the future I intend to realize the all interior. Every room, every corridor will be scratchbuilt down to the smallest detail. I’ve already finished the central section with fuel tanks and gun turrets.

The De Agostini Millennium Falcon as shown in this page has only been exposed one time in Migennes 2018 and will be a second time in Cusset in April. I will expose her once again next year with the all interior completed.