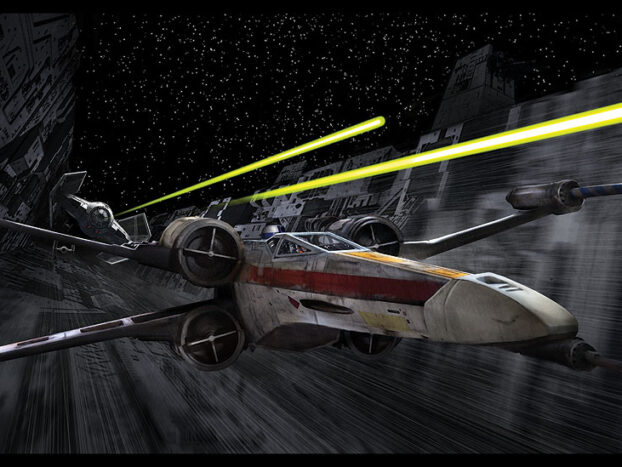 On my mind, the two most emblematic ships in the Star Wars movies are the Millenium Falcon and the X-Wing. A Star Wars models collector must absolutely have one of each. For both, many models are available. In this post, I will compare the X-Wing models, skills and flaws of each models being released since the beginning of times : 1977. I will show you some links to the websites I usually use to get them. Before beginning the post itself, I want to thank the famous Star Wars illustrator Benjamin Carré who allowed me to use his artworks to illustrate this post.

The american factory MPC gets a Star Wars licence at the very beginning. Just after A New Hope was released, they launch an X-Wing model, and a pretty good one.

Well, the box llustration have been made by Kevin, the MPC boss’ nephew, 5 years old at this time. The chief designer didn’t dare to tell his boss this was bullshit. However, the model is in proportion, contrary to what the boxart shows.

This model becoms rapidely unmissable, being the only one produced during the next 20 years. There have been re-boxings, brand names changes (AMT), molds sellings to other brands (Meccano, Airfix…) but the model stays the same from one release to another. So between 1977 and early 2000’s, if you wanted to build an X-Wing, it was the only option.

A funny thing bout this model : it was used during the shooting of “The Empire strikes back” by ILM on several shot showing X-Wings. The guys used a model of their own model… dizzying !

This model shows a few advantages but also many flaws. First, the scale : 1:43, a bastard scale fitting with absolutely nothing. It was period of civil war during which model editors didn’t care about scales. In fact, they fitted the size of their models with the size of the boxes they usually used. Anyway, these sci-fi models weren’t real after all, nobody knew their actuel size, so the scale was not a worry.

As I said earlier, this model has been reedited many times. Here is a galery of the many boxarts inwhich we can still find it :

Those 90’s republications shows a huge improvement : the intaglio engraving replacing the embossed one.

This model had such a huge success that it is available in many variations, some of them a little bit weird.

First curious curiousity : the “Flight display version” edited in 1995. The X-Wing is included in a transparent dish meant to give the illusion of flight… Huch… It rather seems that the pilot collided with a cheese plate. The most astonashing is not that someone had one day this stupid idea (stupid ideas are never missing), it is that a full team said : “Good job, John, amazing ! Let’s transform all our production line to do that !”

A few years after, in 1998, on the eve of the Prelogy, AMT republished the X-Wing at a bigger scale (1:35). This X-Wing model is electronic, the wings can deploy as the main box illustration shows. The model is lighted, which is rare at this time, the LED were not as powerfull as they are nowdays. I’ve never built this version but I guess it worth a try. We can feel John was retired.

Where to find this X-Wing model ?

This model is an antique today, model shops don’t sell it anymore. However, it is not very difficult to find it and its avatars on ebay. The price stands between 50 to 100 $ depending on the version (the cheese plate seems to be the most expensive).

Let’s be honnest for once : despite its historical side, this modelkit has been so outclassed that it is not a “must-have” anymore. That’s what we’ll see further.

In 1983, just after the return of the Jedi’s release, MPC edits a smaller version of its X-Wing in a so bastard scale 1:63. The kit is distributed by Airfix in Europe.

Just one thing about this kit : no glue required. It is the first MPC’s attempt to conquer the non-modelers market. The details remains very poor and make this kit a mock-up without interest.

It now appears that John’s ideas were flowing at this time. The same year, a gold plated version was edited. Happiness : impossible plastic to glue and to paint without sanding the all model vefore. The possibility of buiding the model out of the box remains but the cutting scars will be visible.

And honestly, I don’t know what I would do wioth such a stuff. It’s like Tony Montana becoming a Star Wars fan.

In 2001, a tiny 6 people japanese company managed the produce an X-Wing and a Tie fighter model kit. For the first time in SF history, these two models are treated with great care. The details are very accurate, the scale is clearly announced (and accurate), the figs are great.

The model is almost perfect with the exception of on or two details. The legend tells that FineMolds guys met George Lucas himself, put their models under his very nose and that George was so impressed by their quality that he gave them a free licence. Well, in exchange for a small percentage ont the sellings. I don’t know if this story is true or not but I like it.

This model features a lot of advantages. Therefore, I own many specimen, some of them built, some still in the box.

In 2004, when the Star Wars franchise shows a new style guide, FineMolds performs a classier re-boxing. Yet the model remains exactly the same but what should they change ?

In 2007, the model is re-released with a small goodie : a golden metal C3-PO. Today, this box worth hundreds of dollars. No luck, I don’t have this one despite the dozen exemplaries I own.

Finally, here is a picture of the grids. Well-ordered, eveything is clean. Japanese touch.

Have a look on the well-stocked decal sheet. It allows to complete 4 colorscheme :

Curiousely, Wedge’s astromech is missing but it seems it is a spherical one. therefore it is customizable from R2-D2.

And what does it look once completed ?

I built this model a million times. The last ones are part of my Sullust diorama. You can see it by clicking on the pictures below :

I also used this model to complete my biggest diorama to this day : the Trench Run featuring the Death Star attack at the end of A New Hope :

Obviously, even if the model is full of details and very accurate, it will require a little bit of work and patience to make something good. I encourage you to click on images to find out these build-ups and the technics I employed.

Where to find this X-Wing model ?

As I said before, you can find it only in the second market : ebay and amazon are your friends (well, not really in fact…). And there is me, I own a dozen of theses beuties and could sell 2 er 3 of them. D o not hesitate to contact me.

X-Wing FineMolds 1:48 : not as amazing as it should

In 2007, FineMolds produced the Holy Graal of SF modeling the model that every guys and… guys (be honest : how many girls do you know in scale modeling ?) were waiting for : an almost perfect X-Wing model at a big and standard scale, 1:48.

Lets say it once and for all : the model is a little bit desappointing. Indeed, it doesn’t bring more details compared to its little sister. Except for the side torpedoes launch tubes well represented, at last. A deluxe version featuring C3-PO exists too.

This model is a “must-have”, I own one specimen I didn’t built yet. I would choose a Dagobah diorama but nothing is really fixed. To be continued…

In 2010, another japanese factory works with FineMolds to produce a small 1 : 144 version of their mythical X-Wing. This one is the dividing line between a real model kit and a toy : no glue, no paint, very easy to build but amazing details. Exactly the same as on the FineMolds but twice smaller. The great advantage of this range is its diversity : almost every Star Wars vehicle have been done. It allows to make almost every diorama you may think of.

Those models would be perfect to make a second Death Star attack diorama, in the maintenance tunnel. We could find Y-Wings, A-Wings, Tie fighters and interceptors. Considering that FineMolds and Bandaï have produced a 1 : 144 Milenium Falcon… I’m working on it.

I used many F-Toys in my Sullust diorama, especially an X-Wings in scale with the rebel transprt GR-75. The idea was to create a perspective effect with the FineMolds, twice as big as the F-Toys at the foreground. As the two modls are abslutely identical in details, it works fine.

This is the end of this first review of the X-Wings models through the ages. Every model I mention in this post are unfortunately discontinued now but there are many relatively newer models I will talk about in a further post very soon.

Posted on 22 June 2021 by petersteven in Analysis