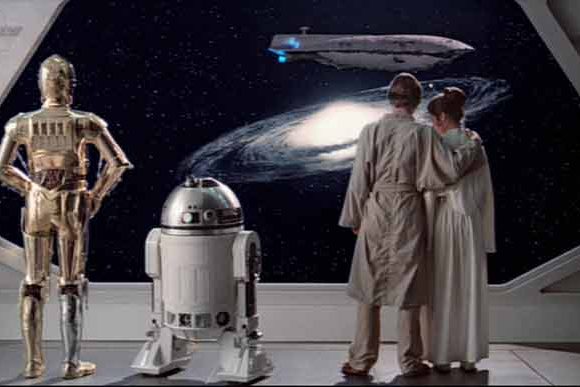 The rebel base on the Hoth planet is discovered. Too bad. They went to froze their asses on a frozen rock while there are planets like Scarif thinking the Empire won’t search them there and bingo, a little probe droid find them in the very beginning of the movie. So : evacuation, battle.

The GR-75 Medium Transport from the Gallofree shipyards are the most numerous ships in the rebel fleet. They serve as transport cargo ships, they are in fact almost empty shells filled with transport crates hung at magnetic racks. GR-75 were successfully used to evacuate the rebel base on Hoth before and during the imperial attack. The rebel commanding staff decided to let them almost escortless with only two X-Wings fighters ; their only chance is to reach quickly hyperspace to escape the imperial destroyers.

The ship is the center of one the most successfull scene of the movie when the “Bright Hope”, first GR-75 evacuating Hoth is breaking through the imperial blockade, covered by the planetary ion canon of the Hoth base. The scene is emotionnally intense, the myth of David versus Goliath is used once again when the small cargo ship passes next to this huge imperial destoyer, disabled by the ion canon.

The cargo ship escape galvanizes the rebel troops and starts the battle of Hoth, one of the tensiest and successfull of the entire saga despite a very weird rebel strategy… to say at least… Using the T-47 tugs when you have X-Wings and Y-Wings and proton torpedoes… But let’s stay focus…

Other GR-75 Medium Transport will be seen in the Return of the Jedi during the battle of Endor. Many of them are clearly visible when the fleet is assembling near Sullust. By the way, we wonder why the Rebellion brings them to battle, they are almost weaponless. They are originally fitted with small anti-fighters canon batteries but rebel technicians have removed them to equip real attack ships. Since Rogue One, we know that rebels are not angels and iwe can assume that they bring GR-75 to battle to serve as “sitting ducks”, easy targets to distract ennemies attention from more important ships. Interesting hypothesis… 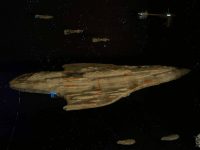 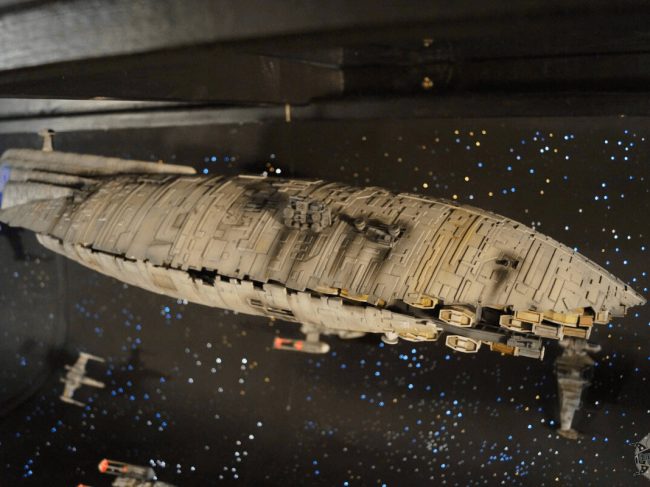 The kit representing the GR-75 Medium Transport is a garage kit from Anigrand which is no more sold nowadays. It’s too bad. Since 2002, this brand from Hong Kong produces original kits that are inexplicably neglected by the “big ones” like Bandaï or Revell. For example we owe them an amazing imperial stardestroyer. Unfortunatly, it seems that Angirand forgot to sign one or two papers (including checks) about Star Wars exploitation rights… So those kits became extremly rare.

The Gr-75 Medium Transport : a simple although efficient concept

The concept of this ship is very interesting (I know, I know, I say that everytime). It’s an empty shell, similar to an inverted scallop underwhich crates are hung. No passageways, no portholes, the only inhabitable area is the upper control pod, no bigger than a starfighter cockpit. Passengers transport crates can potentially be hung but it’s an option

The concept reminds us Space 1999 Eagle Transporters . The crates are loaded using elevators in the base and then the cargo ships can take off without assistance.

Usually, detailing a model using scratch or kitbash method is not a problem. But it’s working only if model proportions are already proper. And this is not the case here. The ship is too short, too “stocky”. When you find out a badly proportionned kit like that, you pass threw the 5 mourning stages :

So I had to extend the structure. To do so, I made a central section trying te reproduce the surface texture of the rest of the kit. I had also to create an internal frame ; the ship wouldn’t have been strong enough if I had just glued the parts together.

One of the most tedious facet of the GR-75 Medium Transport build up is the painting of hundreds of crates using a different color for each. I displayed the crates on great cardboard plates so I could paint them like on an assembly-line. I used a grey acrylic base but the final color is an oil painting washing.

This model was exposed with A Wing, B-Wing , X-Wings and Y-Wing in a rebel fleet diorama during 5 conventions :

It’s the first capital ship I made for the fleet.

You may click here to see the complete rebel fleet.