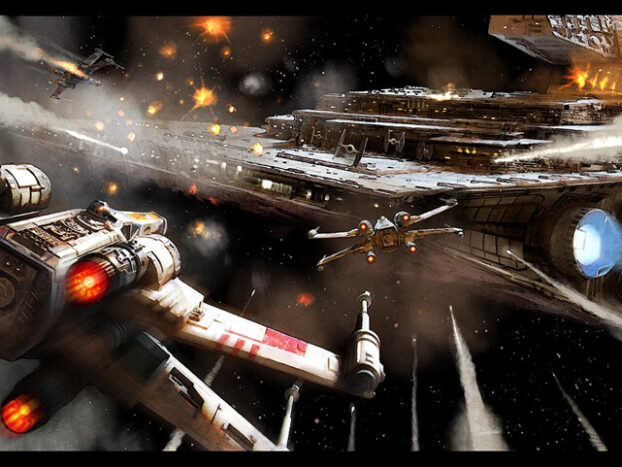 This post follows the… previous one which was about the different X-Wing model kits produced betqween 1977 and 2012, before the Disney purchase. Many things have change since this day, only the biggest companies still have the means to amortize thier investment. But this means not necessarily a decrease in quality as we will see further.

When Disney bought Star Wars licences in 2012, FineMolds lost the right to produce more SW models. Disney fellows went to them and said : “No problem guys, you’re amazing ! You may continue to produce Star Wars stuff. You just have to send us a little 50 000 billion dollars check. Just sign here please.” Of course,, the small japanese company had was not strong enough to amortize such a licence and had to give up.

Hard times for SF modelers like me. Indeed, FineMolds was not very productiven only a dozen of different models in 11 years. The range was not very large and the licence was already lost ! Who would get it now ? Revell had a licence for Europe and USA… unfortunately she kept it. Revell models are so ugly. Their X-Wing models are no exception. Lets start with their core product.

This model came out in 2006 (a long time before the Disney purchase) but this is already a nightmarish sight. Bastard scale, impossible to incorporate in a diorama (1:57), details totally wrong and basic… I talk about this model because I try to be complete about X-Wing model kits but frankly, go away, there is so much better…

In their defence, they adapt to their market. In occident, kids love smartphones and game consoles more than model kits and figurines. Easy and fast kits are needed. That’s why this is a snap kit : no glue, no paint. But this is no excuse and doesn’t explain this kit’s mediocrity ; we will see how Bandaï manage to combine building ease and quality further in this post.

This model kit has been re-boxed twice but nothing has been done to increase the quality of this… thing :

Eays kit Revell : there must be a worse X-Wing model kit. Errr, no.

Why stop ruining the X-Wing when you’re so good at it ? Revell strikes again in 2007 with a small easy kit pocket (1:112). We can’t say they are not creative in scale choice. It is not even twice as small as the previous model. I don’t know how they decide the scale of their models. Probably a clever mix of “I don’t care” attitude and “guesstimation”. Anyway, here is the two box-art versions :

A Revell surge of pride ?

There have been other box arts but I don’t show them, the model remains the same. If you want to see this model details, just go and see the previous post.

This X-Wing model is out of stock almost everywhere. Ebay maybe…

Bandai model kits : they did it !

Bandai gets its Star Wars licence in 2012, definitely a time and space continuum breach. Bandai has huge advantage over FineMolds, it is a big company. One of the biggest in toy industry in fact. And they are eager for rentabilizing their investment. Therefore the Star Wars model range they offer in only a few years is huge.

The 1:72 first X-Wing model kit is even more detailed than the FineMolds’. The model design is very unusual, parts fit together like in a 3D jigsaw, creating a compact and strong model. No glue required at first glance and each part is already painted.

Bandai managed to produce a model for beginners (even children) AND skilled modelists who can incorporate it in ambitious dioramas.

Curiously this model is a little bit longer than the FinMolds’ while they were meant to be at the same scale 1:72. Who’s right ? Nobody. SF vehicles don’t exist (Iknow, it’s hard to believe) and since it’s “working”, that’s ok.

Last advantage, the kit is provided with a very interesting goodie : two tiles of the Death Star surface. More of them can be found in others Bandai kits at this scale (Y-Wing, A-Wing, B-Wing). They make it possible to build some very detailed stands or part of a very convincing diorama.

Bandai re-boxed this kit in a “Red squadron” set also featuring their 1:144 kit. They stole me the idea of a diorama with depth effect I made on Sullust. I forgive them.

Lately, just after the episode 9 release, Bandai producd the kit in a new box and with a new pilot : Rey. Same model but don’t deny ourselves a good thing especially since the box has a beautiful illustration.

Like Revell years ago, Bandai produce in 2006 its X-Wing at a smaller scale. The detailing skill is still excellent and the structure fo the kit is more classic with empty parts. This kit’s lightup is paradoxally easier to do than the 1:72’s one.

This X-Wing model kit is part of a collection of small scaled models produced by Bandai. Many models have been added to this collection including capital ships like the Stardestroyer or the death Star.

In addition, two sets have been produced and include this X-Wing model. The first features the X-Wing and many death Star surface tiles :

You may find this set in the “unboxing” video of my friend Yvan West Laurence on YouTube.

The second one looked good on paper but in fact it seems that it is a shity idea. Indeed, the models are transparent… I always wonder what may cross people’s mind when I see things like that. After the cheese plate and the bling-bling golden X-Wing from AMT, I thought I could’nt find a dumber idea.

In this patragraph, I will compare the 5 main X-Wing model kits described in this post and the previous one. I did’nt compare the all grid, it would have been to long but only on part, very distinctive : the upper technical gallery behind the pilot. Enlightening.

Let’s go on with an X-Wing model wich is not really a kit. Almost 10 years ago, the game editor Fantasy Flight Game produced a small game which did’nt look anything special : Star WArs X-Wing Mniatures Game. The game contains mini-starships (1:270).

Those small one-part ships are not meant to be built but the detail level is amazing for the scale. They can easily be used in dioramas with larger ships like the Corellian Corvette.

There is a lot of references in this collection, especially if we consider the second version of the game. The X-Wing is in the first wave and is really a success.

Here is a close-up picture of the X-Wing :

The game itself is very good. At least the first issues, after that , it degenrates a little. But this collection is especially worthfull for the quality of its small models.

Last model produced at this day : the De Agostini X-Wing. unfortunately, I didn’t get this model since I already sold a kidney to buy the Millenium Falcon. And I heard that selling two kidneys lead to painfull health problems. Probably a fake news but I did’nt take the risk.

I won’t write many thing about this model since I never saw it in real life. I can only tell you what I read on the net : very expensive and very beautiful. The scale is huge (1:18), 70 cm in length.

Here is an ad picture :

Everything is super-detailed, the lightup is included, even the original paintjob is not so bad. (a real modeler would re-make it of course). Be careful, this is a subscritpion formula. the price is almost 14 $ a week (in Europe) with 60 issues to come (more than 800 $ overall). The subscription is now over and contrary to the Falcon, it seems dificult to find on the second market. It remains a dream for many of us. For further details, I send you to the De Agostini website and the video of my friend Yvan West Laurence .

Conclusion (the good one, this time)

For many years, X-Wing models were rare and not very exciting. The early 2000’s change evertyhing and a race to quality took place since then.

You can find anything you want in that matter, from the ugliest to the most beautiful, every scale, every price. I hope that those two posts about the X-Wing models helped you to choose. See you soon on a new model or diorama review.

Posted on 1 October 2021 by petersteven in Analysis