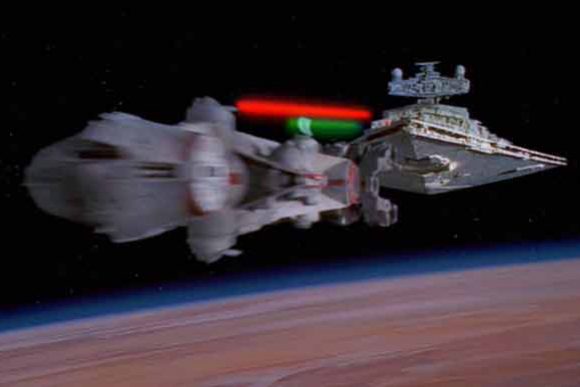 The corellian corvette “Blockade Runner” is simply the first starship seen on screen in the entire Star Wars saga. The model shown during the famous and unsurpassable opening sequence of “A New Hope” is the Tantive IV, princess Leia’s consular ship. Darth Vader is chasing her in order to get back the Death Star plans stolen during the battle of Scarif shown in the spin-off movie “Rogue One“.

This ship is the theater of the introduction of the first Star Wars movie ever and therefore the all Star Wars saga, hence her importance. The opening sequence remains still impressive today. Despite her 11 thrusters, the ship can’t escape Vader’s imperial stardestroyer. The boarding is violent, many rebels die but Leia manage to record the Death Star plans into a small astromecano droid R2-D2 who takes flight in an escape pod.

The story doesn’t relate the fate of the ship after her boarding but we can imagine she was destroyed since Vader ordered the galactic Senat was told the ship is lost and “that all aboard were killed”. The Blockade Runner has always been an important part of the rebel fleet so it naturally contributes to the battle of Endor during “Return of the Jedi“. by the way, one of them is destroyed by the new Death Star superlaser. 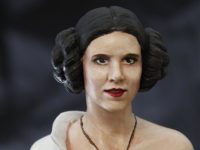 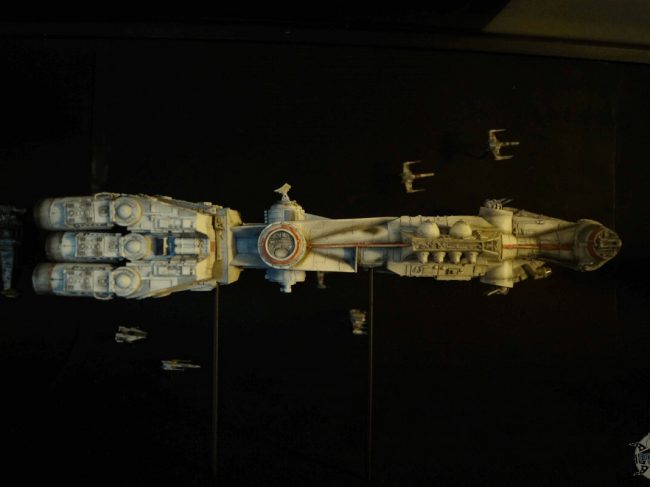 This model of the Blockade Runner (called “Rebel Runner” by Bluemoon for licensing reasons) is a collection of resin blocks hard to assemble. It’s a garage kit pretty hard to find nowadays and at very high prices, making the price of the new i-phone 43X-27 ridiculous. Like the GR-75 Medium Transport or the Stardestroyer, you may ask why big brands like Bandaï or Revell didn’t produce it already. Maybe too big and too complicated. Unfortunately the hobby modeling market targets children with easier models. No glue, no painting… We are condamned to find garage kits on the asian market for serious stuff.

What makes the Blockade Runner unusual are the 11 rear thrusters. It’s the designers’ choice to point out the speed of the ship. It seems a little strange if you remind that the only role of the starship in the movie is to be cought but you must keep in mind that at the beginning of the production, the design was the Millennium Falcon‘s

Knowing that, you can imagine why ILM designers wanted a speed feeling (Kessel Run, 12 parsecs and all that stuff…).

This feature is a huge challenge to the model maker : how to perfectly align those 11 thrusters ? No specific technics, it’s a question of feeling. You use epoxy glue which is very… gluing and long to polymerize. Then you have time enough to make the alignement right.

The Blockade Runner, a christmas tree

Aligning the thrusters is good. Lighing them up is better. I designed a 11 yellow LED circuit, which is not easy because 11 is not a prime number. I divided the LEDs in 3 electrical branches : 2 with 4 LEDs and 1 with only 3 plus an electrical resistance simulating the 4th LED so that the intensity is the same in every branches.

This point is essential to light-up each thruster with the same light-intensity. This quite complicated circuit requires a pre-test on an electronic plate.

As it is so often the case with resin kits, brass rods must be used to strengthen the ship structure. The french term is a neologism : “tiger” what could be translated by “roding” the model. I used three rods of large cross section on this model. Indeed, the engine block is heavy and could weaken the ship integrity.

Exhibition of the Blockade Runner

This ship is now a part of a large diorama of the Sullust rebel fleet.

It has been shown during three conventions :

Click here to see the complete Sullust diorama of the rebel fleet.