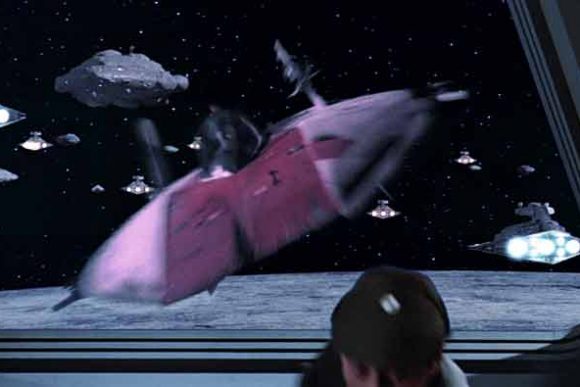 Emperor Palpatine oversees in person the last phases of the second Death Star construction (in fact he’s just lazing around in his throne room, pushing a button from time to time in order to justify his emoluments)

At the same time, the rebel fleet is preparing the attack on the Death Star. There will be two assault waves : on the ground, teddy bears and in space, the rebel fleet will field his starfighters X-Wing, Y-Wing, B-Wing and A-Wing. A-Wings are very fast but hard to pilot fighters.

During the battle, several A-Wings pilots distinguished theirselves including Arvel Crynyd playing the kamikazes by launching his damaged A-Wing onto the Executor’s bridge. The superdestroyer Executor, flagship of the imperial fleet and Vader’s personnal vessel is destroyed in the operation.

Many A-Wings was part of the final assault on the Death Star through a maintenance tunnel leading to the very center of the station and to the main reactor. Halfway, the squadron leader Lando Calrissian tasked them to reach the surface, dragging their Tie pursuers with them. So they won’t be responsible party for the Death Star destruction itself but their role will continue to be decisive by opening the way for Lando’s Millennium Falcon and Wedge Antilles’ X-Wing.

Even though they are little seen on the screen (a total of just under 2 minutes ), the A-Wings has a very special role, recurring in the Star Wars saga as they embody the David vs Goliath myth through Arvel Crynyd sacrifice. 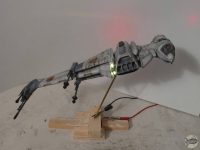 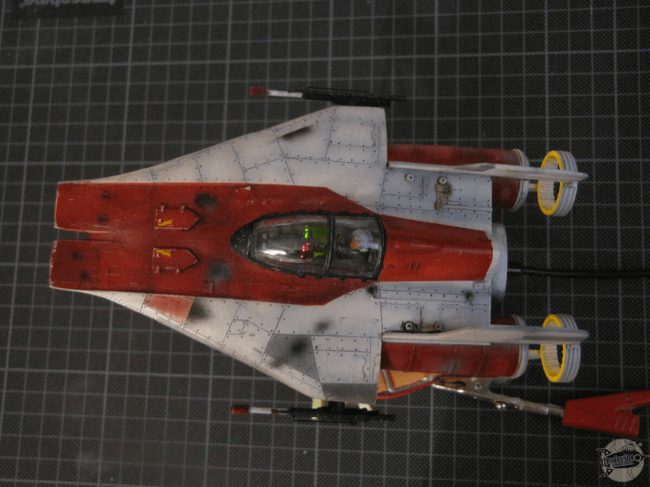 In the orginal trilogy, the rebel alliance can field four starfighters type. Between the old BTL-A4 Y-Wing put into active duty during the Clone War and the new B-Wing, the famous multipurpose fighter X-Wing T65 and the fast light starfighter RZ-1 A-Wing can be seen. Maybe it’s not the most interesting design of the saga (in fact it’s just a lightly modified plane) but a Star Wars model collection cannot be considered complete without a RZ-1 A-Wing.

Until recently, A-Wing models were pretty hard to find . The range of solutions was reduced to the old AMT kit, produced in the 90’s but made from a mold bought to Airfix in the 80’s. At this time, nobody cared about scales. This kit’s one may be 1:48 or may be not. I decided it is. One interesting feature is the relief engraving of the panel lines. This feature wasn’t rare on models at that time. But I sense you wondering : what is relief engraving ?

Producing a plastic model kit requires plastic injection into a metalic mold. Obviously, it’ easier to engrave a groove on the mold leading to a relief on the final plastic part than the doing the opposite. Unfortunately, this is not realistic at all : lines between armored panels of a vehicule shall be grooves and not reliefs.

The longest work on a kit like this one is to sand the panel lines and engrave new ones exactly at the same place. The engraving itself requires a worn scalpel and strips for Dymo labelling machine for straight engraving. The work consist of scribing again and again the line then sanding again and again in order to remove enough matter.

The ship was lighted-up into the trusters and the cockpit as always do in my models. The pilot is a modified WW2 soldier.

I added two missiles-launchers beind the two side gaps. I used parts from tanks models and WW2 brass explosive shells. Spending so much time detailing almost invisible parts like that could appear weird. Well… it isn what else could I say ? Let’s say they are a little visible…

This model has been seen during 5 conventions, it’s now a part of huge diorama called Sullust. :

Click here to go to the “Sullust” diorama (in french for now).