Warning: Invalid argument supplied for foreach() in /home/users3/u/uez5263/www/wp-content/themes/fantastic_modelers_theme/banniere-parallaxe.php on line 15 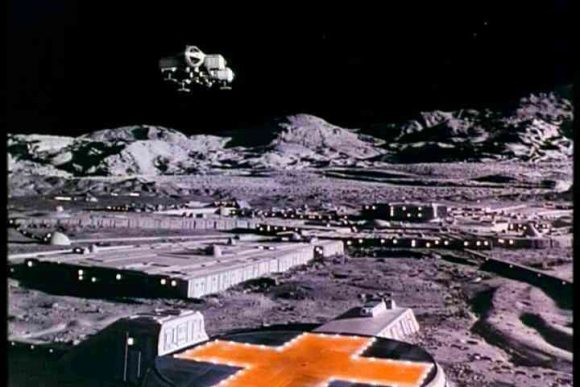 Space 1999 is an english television series belonging to the subgenus “high perched Sci Fi” (french expression no english translation, sorry…) in the same vein as 2001 a Space Odyssey where pseudo-philisophical questions take precedence over pure action.

The action takes place in the futur, in 1999 -oh, I’m so old, when I was watching this series in the 80’s, I really thought 1999 was the futur ! Human kind must store his nuclear wastes on the Moon into a place called “Alpha Moonbase” led by John Koenig played by Martin Landau.

During the first episode, somebody forgets to turn off the nuclear reactor after using the restroom. The explosion is so violent that it tears the Moon itself off and jars it out of its orbit. Not the Independance Day petard ! The series tells what happens to the 311 inhabitants of the Alpha Moonbase during their journey to the edge of the Universe. A radioactive Moon travels very fast, you can’t imagine…

The standard vehicle of the Alpha Moonbase is called the Eagle Transporter. Cool name. Cool ship. One or two Eagle will be crashed in almost each of the 48 episodes. And the “alphamooners” still have as many of them as the first day…

Wether you like the series Space 1999 or not (and personnaly, I’m no big fan), you have to admit that the Eagle Transporter models had hell of look. The design, simultaneously futuristic and a little bit awkward already prefigure the “industrial” design of Star Wars, produced one year after the series began. The base structure of the vehicle is tubular, the cockpit only is sealed. The ship center is filled with by a transport module, sealed as well but removable. In line with the task assigned (being crashed, being destroyed, being anihilated etc.) the center module can be adapted. By the way, others variations of the model has been produced by the manufactrer. Maybe one day will I make a different Eagle. 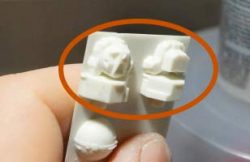 This model has been ordered to me in 2016 by a client, fan of Space 1999. I spent almost 3 monthes building it, its structure being rather complex. It’s an interesting model showing many accurate parts ; the two halves of an Eagle from the Apollo program can be recognized on the hull. I’m sure it was an easter egg from the modelists working on the series. The odds are pretty good the modelists had taken them from a Saturn V model and really used them on the filming models. You can see them inside the orange circle on the picture to the right.

This practicing was very common in the TV and movies modeling workshops : rather than creating original parts, long and expensive process, using parts from an existing kit is more convenient. This technique is called “kitbash”. 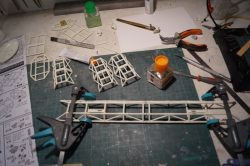 Unfortunately, because of the tubular structure of the Eagle Transporter, I had to bear quite long sanding works. A model kit is frequently found to have what is called “split lines” where the two halves of the mold are jointing during the production of a part. A few liquid plastic always finds its way between the two parts of the mold. The result is an ungracefull split line along almost every parts of a model. If you ask a model maker his schedule, he would answer : “I sand plastic and I clean my airbrush, nothing else”. On this model, I spent hours to sand many meters of tubes to elminate those %ùç#!!&&@ split lines.

The building work however complex is quite enjoyable but it requires a lot of putty to mask the joints between parts. The paint job is nice to do ont the flat parts, the panelling is made with stencils. It is more boring on the tubular parts, nothing should be forgotten.

The base represents a lunar ground. First I wanted to make an orange cross landing runway as shown in the series but a lack of plastic card made me change my mind. I finally made a lunar ground using plaster coating. I sculpted the relief, waiting the coating had began to dry. The paint job is made with an airbrush at grazing incidence.

Exhibitions of the Eagle Transporter model

This model has been shown two times in conventions :

Today, its owner pampers it lovingly in Switzerland (well, I hope so…)