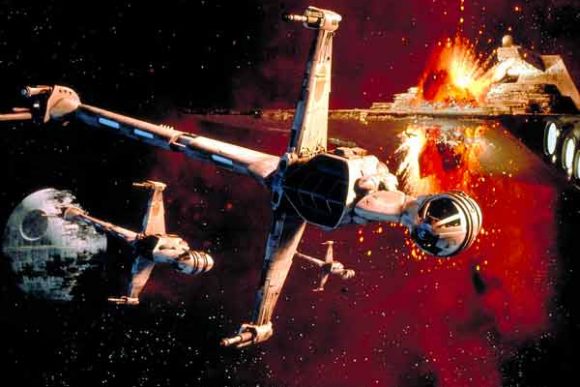 The rebel fleet is about to jump into hyperspace to reach Endor where the final battle against the Empire will take place. The plan is to defeat once and for all the imperial fleet, destroy the Death Star II, kill the Emperor Palpatine. And if there is still time, get cookies. The scene, one of my favourite in the entire saga, sustained by an amazing John Williams piece of music shows a starfighters group slaloming between rebel capital ships just before jumping into hyperspace. Among them, for the first time on screen, the most astonishing design in the all prelogy : the B-Wing.

No, no don’t rush toward your videotape recorder to watch Return of the Jedi once again and search the picture I used to illustrate this text. Leave your videotapes and Laserdiscs alone, it’s not in the movie although it’s the most popular picture of B-Wings. I even remember having seen it in my english schoolbook when I was 13 ! It should have been in the movie, it’s so cool but Richard Marquand (who ?) did not keep any action scene featuring B-Wings to save a few movie minutes.

All we have now is a few seconds during which a few B-Wings can be seen slaloming between capital ships of the Rebel Alliance and deploying their wings just before entering the battle but that’s all. It’s a shame because this ship is perhaps my favourite, she has a really original design, never seen before.

Everything is going in pairs on a starship : wings, guns, ailerons… Here, the magic number seems to be 3 which forces you to think clearly about the operation of the starship. The gyroscopic cockpit leads to imagine crazy acrobatics but unfortunately, it’s coïtus interruptus, we see nothing in the movie. We don’t even ear the usual line of the squadron leader : “Blue leader, standing by” (well he’s sullustean and doesn’t speak english, ok). Too bad but models and pictures are here, easy to find on the web. 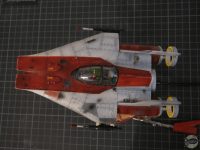 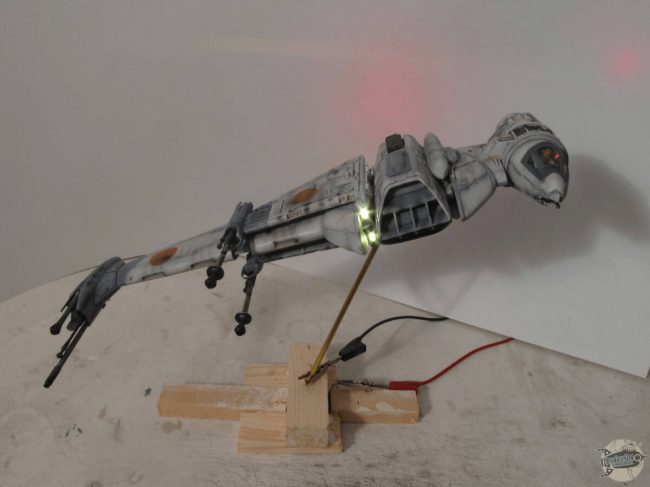 The name of the kit “Cruciform fighter” and no “B-Wing“may be surprising. Well, it’s a “garage kit”, that means a resin kit produced in very low numbers ; my bank manager still remembers the day I bought it… Those kits are non-licenced products and can’t have a licenced name, making them even more difficult to find. Attention : nothing illegal here ! The manufacturers are merely limited in the numbers of copies they are allowed to cast. Lucasfilm takes also advantage of that : fair and free advertising for the Star Wars licence. Everybody’s happy.

Unlike injected plastic kits, the parts are very often filled therefore heavy, which needs some care during the assembly. A simple gluing between parts won’t work most of the time : the model

would be too breakable. Therefore, I built this B-Wong like a brochette, threading the different sections one after another around two brass rods.

The rods also allowed me to bring the current in all sections of the ship. So I could insert the different lighting LEDs in the structure itself and solder them on the rods. Two rods were needed : on for + pole, one for – pole.

Resin kits are more difficult to build than plastic ones. The matter is softer and thin parts like guns tend to curve. It’s often necessary to scratch these parts with harder matters like brass or steel.

The cockpit has been entirely detailed. Cockpits are usually poorly detailed in garage kits. Most of the time, they show only a few details hardly evoking a command panel. Unacceptable if you want to make a high level model. You will have to do kitbash to improve the model. This technique requires a few imagination to think up the final painted rendering. I often have my own doubts during the process…

I wanted to have a sullustean pilot because everyone knows (every star wars fan at least) that B-Wings are very hard to take in hand and only the greatest pilots can. Sullustean are well known to be the best pilots (what a racial determinism…). I got a Nien Nunb fig I decapited and whose I glued the head on WW2 pilot, scaled 1 : 48. The rendering is pretty good (boom, a self congratulation, if I don’t congratulate myself, who will ?) ; the sullustean all have similar heads.

Like his little brother the A-Wing, this model is now part of a huge diorama represanting a complete rebel fleet : “Sullust“. I’ve shown this B-Wing during 5 conventions :

You may click here to see the complete Sullust diorama