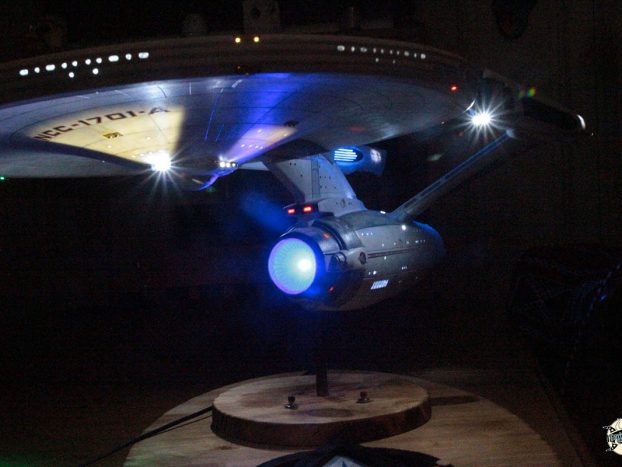 Over the past few months, I’ve been working on an Enterprise model kit, at least a version of the Enterprise : the USS Enterprise NCC-1701-A. I won’t review again this model work, you can find many details here. Before I was ordered this kit, I knew nothing (John Snow) about Star Trek. I saw a few episodes when I was a kid but I did’nt imagine the extent of this universe. I won’t tell the all story of Star Trek (more than 700 episodes during 6 TV shows…) but instead have a look on the different Enterprise ships being at the center of the shows and the movies, using my modeler’s eye of course.

All Enterprise ships are based on the same concept :

In the History of Star Trek, the first ship called Enterprise is the captain Jonathan Archer’s (played by the amazing Scott Bakula). The Warp nacelles, similar to the original series’ ones are relatively small.

I have never made this model before. I was asked to a few years ago but I declined. Nothing but Star Wars for me at this time. I’ve been cured since. The biggest challenge is the panelling, extremely complex. The best way is to use decals sheets. Many decal kits are available, they are more than 10 sheets long.

I have long held the belief that the name “Enterprise” referred to THE Star Trek spaceship. When viewing the TV shows, you can figure that the NCC-1701 registration was given to many ships during History. There is not only ONE Enterprise but a all collection. Modelist’s delight.

This version is first seen at the end of the TV show Star Trek Discovery’s first season, making her the most ancient version of the Enterprise regsitered as NCC-1701. Indeed, the Discovery TV show takes place almost 10 years before the orginal series.

This Enterprise looks very much like the original series‘ one although she was slightly restyled to look more up-to-date. She was commanded by the captain Pike, before he went into the microwave.

This version of the Enterprise is seen more closely during season 2. Comparing her with the original version of the USS Enterprise NCC-1701 would be interesting. However one might wonder how to justify the “tuning look” with lights everywhere of this version although she is an earlier one.

The Enterprise is not the very first starship seen on TV but she’s the most famous and recognizible. Knowing the USS acronym’s meaning is interesting : United Space (or Star depending on the sources) Ship. The producers wanted to introduce a patriotic US reference. Indeed, every Navy ships are called USS… for “United States Ship”. The NCC letters have no particular meaning, they are simply a registration. Most of the time, the starship Enterprise is led by the vulcan M.Spock. Given that Kirk is just too busy fondling everone carrying an X chromosom and passing within 10 light-year of the Enterprise.

A simple style due to her time period, the 60’s. A very clean futur, smooth areas, singled color vehicles where imagined at this time. Star Wars and Alien hadn’t make their presence felt.

Pylons are thin, WARP nacelles are cylindrical, the angles are right. Very few lights, portholes can almost be counted on the fingers of two hands. A very kitschy detail, both unrealistic and very interesting to reproduce as a model maker : the kaleidoscope at the front nacelles.

During the year 1979, the Paramount revive the franchise by producing “Star Trek the motion picture”. Fifteen years have past since the original series. Star Wars has set the “futiristic design” once and for all. the USS Enterprise NCC-1701 can not be reused as it was. The ILM model makers (the same as for Star Wars) have refit the starship.

The ship’s design has been radically revised. Although the bas structure remains untouched, every element has been modified : the WARP nacelles are more profiled, richer in decoration and ligthning, the 60’s kaleidoscopes have been removed.

The deflector radar of the oroginal series is replaces by an illuminated dish wich have the ability to change color when the ship go to WARP. The surface is far less dreary, the conceptors have applied a pearly paneling showing a rare complexity. So the ship’s surface is far more interesting. Well, this is not a Star Wars ship yet… the Star Trek design is still here but we’re getting closer.

In Star Trek 3, Kirk who didn’t like the new color, destoys hte ship on purpose. She will be identically tirebuilt with blue tones (and not green).

From a structural point of view, nothing new is to be said, this version of the Enterprise is almost the same as the previous one. Only a very small modification of the neck’s base grid can be noticed.

The only real innovation is the registration at the end of which the “A” letter has been added. This registration categorization will be used for the all futur series. Well, if you went so far on this text, it’s because the link to the model review is not obvious enough so I put it again.

The Star Trek franchise gathered the two generations during one movie. The beginning shows us the USS Enterprise NCC-1701-B inauguration under the lead of the famous captain John Doe.

During the first flight, an incident occurs and the captain Kirk falls into a vortex, head first. Nobody really knows what a vortex is but it sounds good in a sci-fi text. This puts an end to his career and franly it was time to.

This version is in fact a recycling af the Excelsior which can be seen at the end of Star Trek 4 and during Star Trek 6 (then led by Mr Sulu). Same concept but the “cigar body” is replaced by a very naval shape. A simple oponning in the hull receives the front deflector dish. The pylons are flat angle brackets and not huge rods any more, prefiguring the Picard’s Enterprise-D. The model makers have also refit the WARP nacelles and the saucer. This one seems upside down comparing to the A model and rectangular modules are know visible at the rear.

A Next Gen episode shows the USS Enterprise NCC 1701-C during a time travel. An excellent episode by the way, as usual when it comes to time travel.

The ship is a mix between the Enterprise A and the Enterprise D, the main ship of the series. The “cigar-body”, the “neck” and the saucer are almost the same as the A ship but the WARP nacelles remind the D’s ones. The starshiphas been designed as the missing link between those two Star Trek eras. Anyway, she seems simpler in her construction than the others Enterprise which is understandable considering the model does appear in only one episode.

This version has the most on-screen time in the all Star Trek series. Indeed, she appears during the all 7 seasons of Next Gen with the same crew. The captain is the french guy Jean-Luc Picard.The ship is seen during the Star Trek Generations movie but she is destroyed at the end because there is no reason that Kirk was the only one having the right to crash his ship. If you do not have crashed a Starfleet ship by the age of 50, you have misses your life.

This version reintroduces the WARP kaleidoscope at the front of the nacelles. I don’t get used to it, I find them far too toyish… The pylons are more integrated to the hull body. The central body is no more cigar-shaped, more flattened, like a bean. The forward deflector is still here, still floodlit.

The biggest difference is the saucer. It shows an elliptic shape, no more circular while being much bigger. The number of portholes as significantly increased. Realizing this model waould be a nightmare : hundreds of tiny masks with with masking tape to be done…

Honestly, she is not my favorite version of the Enterprise, I find her a little “unbalanced”. The saucer is too much huge, the WARP nacelles are not highlighted being located under the median plan of the saucer and their toyish look is a little appalling.

This is the last version of the Enterprise (almost…) watchable in the movies and series : the USS Enterprise NCC 1701-E. There, I love her ! The line of the ship is amazing, much more slender than the previous clumsy version. I suspect Picard of havign crashed his ship on purpose during the previous movie. This ship is at the front line to fight the Borgs in Star Trek First Contact, is doing almost nothing in Star Trek Insurrection and defeats Mad Max himself in Star Trek Nemesis.

In addition, the old right pylons are back and the WARP nacelles are once above the median plan of the saucer once again. The ships hangar go back at the rear of the hull body, like on the oldest Enterprise.

The paneling is frightfully complex and the numbers of portholes beats the record. For the first time, the neck desappears, the body and the saucer are joined together. Teh saucer is still an ellipse but the major axis is aligned with the ship axis and no more perpendicular. These two modifications gives the ship its elegant slender line.

Many ships were named “Enterprise” into the different alternate universes visited by the characteres. Let’s just list :

A 50’s design, we can almost see a Cadillac. The paneling suggests strongly a Star Wars ship.

Briefly seen in a Star Trek Enterprise episode, the ship belongs to an alternate futur, during the 26th century.

During the very last epsiode of Next Gen, Picard travels threw time and meet a bitter Riker leading an astonishing version of the Enterprise-F showing three WARP engines. So she is much faster than the previous versions. You just needed to think about.

The Enterprise is a myhtical spaceship, in the same way the Millenium Falcon is in Star Wars. By the by, it is funny to think that both are no more no less than a customized flying saucer… There are many versions of the ship wich allows to constitute amazing models collections. The “evolution” side is always fascinating in a models collection. This order allowed me to discover this amazing Star Trek universe, to overcome the vintage sci-fi side wich can be off-putting at first sight. So I wish to thank Jean for having ordered me this model.

Posted on 24 May 2019 by petersteven in Analysis, Finished model