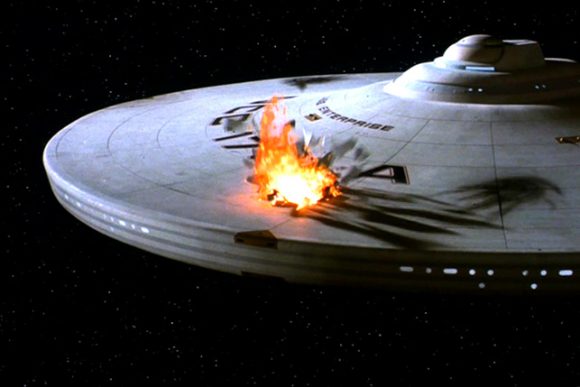 The model I made does appear for the first time at the very end of Star Trek IV – The voyage Home. Captain Kirk, Mr Spock, doctor “Bones” McCoy, Montgomery Scott, Pavel Chekov and Hikaru Sulu ar back from their time travel onboard a Klingon bird of prey to save the world from an alien probe cetacean-lover. Their action allowed to be re-integrated in Starfleet after their sedition during epidode 3. Kirk find a brand new vessel : the Enterprise NCC-1701-A. Well, it’s not so new considering this is exactly the same than the one destroyed during episode 3. One or two spots of paint and hop ! A new ship.

Star Trek V – The Final Frontier is the first movie where this model is really used. The film relates how the crew of the Enterprise is responsible for quelling a revolt of… err.. 12 tramps on a far away Tatooine-like planet. the rebels are lead by Sybok, half-brother of Spock. When you realize that an interstallar journey consums almost 200 years of energiy-savings, it’s quite expensive just to kick a few asses on a junk-planet nobody care about. Let’s concede that in 2287 lithium batteries may have been improved.

After a few adventures not least of which is the 57-years-old-Nichelle Nichols striptease, the crew eventually meet God himself (or a guy who prentends to be) biyond the “final frontier”. But God is not very kind, so the come back.

This movie is known as the worst of the series but it allows the model-maker to admire the new Enterprise and esecially the inner-layouts like the main hangar-bay. Indeed, a transporter failure leads the crew to use shuttles for transportation. Obviously, shuttle-driving is not their specialty . 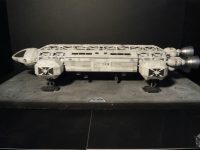 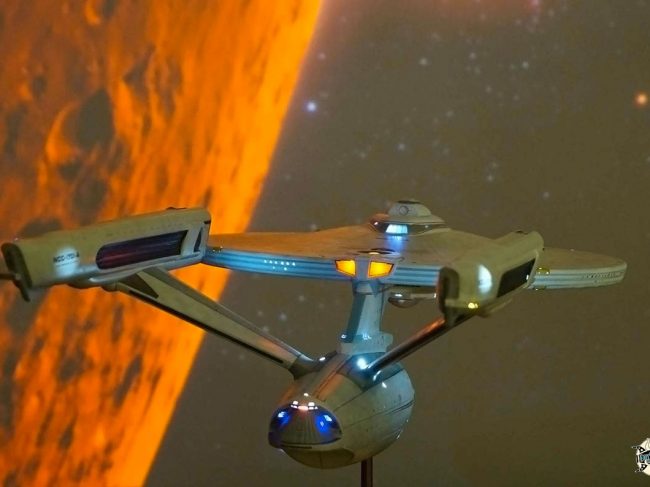 Building an Enterprise model is not very easy. First you have to choose the version you want : a lot of them are available. The Polar Light kit I used allows to build two versions : the NCC-1701 (seen in episodes 1,2 and 3 during which she is destroyed) and the NCC-1701-A. I chose this one because fo the blue tints I liked muche than the green ones one the original vessel.

The interior fittings of the U.S.S. Enterprise NCC-1701-A

The U.S.S. Enterprise NCC-1701-A is seen in three movies (episode 4, 5 and 6) and you can never see the arboretum (a complicated name to name a garden). I watched every movies and every Star trek episodes ; if on shows the arboretum, I missed it. I dont’ know where Polar Light picked up this idea. Nevertheless, it’s a good one.

I’ve just re-built the trees, the water and the bushes. A photoetch kit does exist to improve the mini-diorama but it’s expensive and once the ship is closed, you can see almost nothing. I worked by improvisation, as usual. The ceiling was an ordeal. It had to be transparent for ligthning effects and painted to be realistic. I made an insane masking which took several hours… and won’t be seen at the end ! Such is the fate of model makers.

Just imagine hundreds of 1/2 mm cuts I had to do to make this masking. The masked parts are to be transparent to let the light pass threw them. The free parts were painted with silver and dark grey layers. The all stuff was klir varnished.

You can find additional details on the inner-parts design in the “work in progress” articles I made earlier.

As general rule, this assembly was first a masking techniques experimentation. To simulate the light spots ont he ship surface, I painted the interior surface with a silver and then black coat with the exception of the few areas I wanted to let le light pass threw. You can see the result jeust below, in the gallery.

The ship’s body, the “cigar” received a very complicated paint. I had to use masks from the Aztek brand. Cutting them by myself would have been way too long and the result probably not as good.

An interesting feature about the Enterprise is the lightup complexity. And it must be admitted that it is really a beauty. If you have 2 ou 3 hours to waste, click on this ce lien to watch the “self-abuse Enterprise scene” as a friend of mine calls it. The lightup litterrally brings the model to life. To recreate this complexe lightup, I had to buy a kit sold on the Trekmodeler website. Very expensive but very beautiful. With hindsight, I think I could have conceive this lightup by myself using an Arduino chip. Next time.