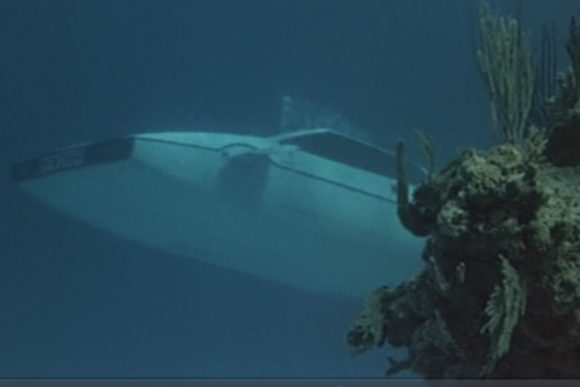 James Bond
The Spy who loved me

James Bond a.k.a. Roger Moore has just been chased by Jaws and his henchmen. The ground pursuit ends by a sea dive when Bond was strafed by an helicopter. Just another day for James Bond…

At this moment, we can see the car going deep under the water and then, surprise, it turns into a submarine ! The following combat sequence is one of the finest in the all James Bond saga. Many underpaid Stromberg’s divers get slaughtered by the most surprising gadgets of the car. The fight finally ends when the Lotus Esprit get out of the water under incredulous look of tourists.

If this scene had occured in a nowday movie, it probably would have gone unnoticed while we are literally buried under irreproachable special effects. But the Spy who loved me has been produced in 1977 (what a year…), SFX movies are still rare and seeing a submarine car was just amazing. Just seek “James Bond Lotus Esprit” on a search engine : 3.5 millions results.

The Spy who loved me is the first James Bond I ever saw. The transformable Lotus Esprit is a wondeful childhood memory to me. Last but not least, Barbara Bach is inside (well, not really), simply the most beautiful of all the James Bond girls. 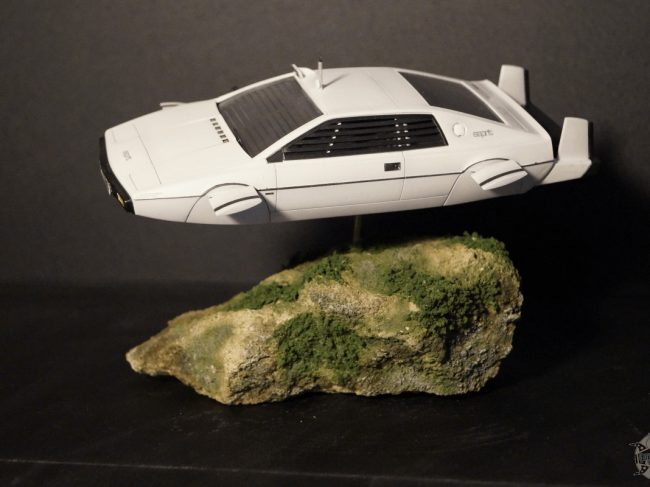 I didn’t really scheduled this assembly. I was placing an order on starship modelers, photoetch for my Eagle Transporter when I saw a Fujimi Lotus Esprit. I didn’t knew anything about this kit before. Compulsive shopping. I built it just after the Eagle, as if I had taken a digestive after a good meal.

Not much can be told about this work, I just built it “out of the box”, following wisely the instructions plan. The model is a good one, high quality. The interior is poorly detailed but it doesn’t matter, it is quite invisible once the car sealed. For an important project, I would have make the effort of superdetailing but I told you, these was a candy.

The Lotus Esprit cannot really turn into a submarine

I know, it’s desappointing but if you look closely the scen, you can see the transformation is a trick :

The screenshots are explicit : it is not possible the car turned into the submarine version. Only the magic of special effects made us believe it. Magic and the fact that in 1977 DVD’s and uploading didn’t exist, no one could have froze an image for checking.

Another detail shows the transformation couldn’t be performed. Sort of louvered shutters appeared uppon all the car’s panes. Hard to understand where they came from. In fact, the movie images don’t show this appearance. They show us the wheels vanishing but not the louvered shutter appearing. One may wonder about their purpose, riding a submarine with so little visibility would be a pain in the ass. The answer is simple : the filming submarine was really working but it was full of water and maneuvered by two divers. The louvered shutters were here only to hide the divers. Sorry, Roger Moore and Barabara Bach were not really in the submarine.

Unusual news : Elon Musk, the famous billionaire is on the edge of recreating a really transformable Lotus Esprit. After droping a car into space, he will drop one into water. I don’t know if you are like me but I’m beginning to think this guy is really a James Bond super-vilain…

An interesting feature of this modeling work is the main hull color. “Now what ? It’s white !”. First, i would appreciate you talk to me smoothier, who do you think you are ? 🙂 White does not exist in model making. No more than black in fact. You always need to use an off-white color by mixing your white painting with a warm or cool color, depending on the effect you seek. Here I chose light-brown. Look at things arround you, you’ll see that even the whiter surface you’ve ever seen comes out lightly tinted because of the daylight, a reflection or natural weathering.