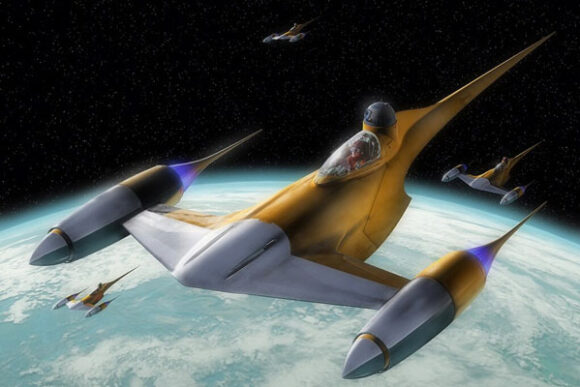 The Bravo squadron attacks the Trade Federation mothership wich coordinates the droid forces during the blocus of Naboo. As always in Star Wars, the struggle is totally uneven, a handful of Naboo N-1 undergunned starfifghters attacks a huge ennemy fighters fleet with almost no chance of survival.

The huge Lucrehulk starship shows an impenetrable heavy shield and the only option is to go inside the main hangar and fire random proton torpedoes, hopping they hit a vital point of the ship.

Considering such an… unpromising plan, the Bravo squadrons pilots stay prudently on the outisde, pretending fighting other ships and waiting that one of them dare do the the job. Of course, the movie hero, Anakin Skywalker do it. He miraculousely spins between enemy droid fighters, go indide the main hangar by accident and fire unwillingly a proton torpedoe and blows the all thing up. And that’s Anakin first mass killing : 300 dead neimodiens. And that’s just the beginning. Well, his sonny will do far better with the first Death Star and more than 370 000 victims.

“Err… isn’t that a little unprobable that…” 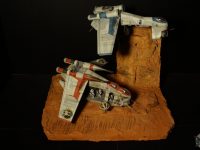 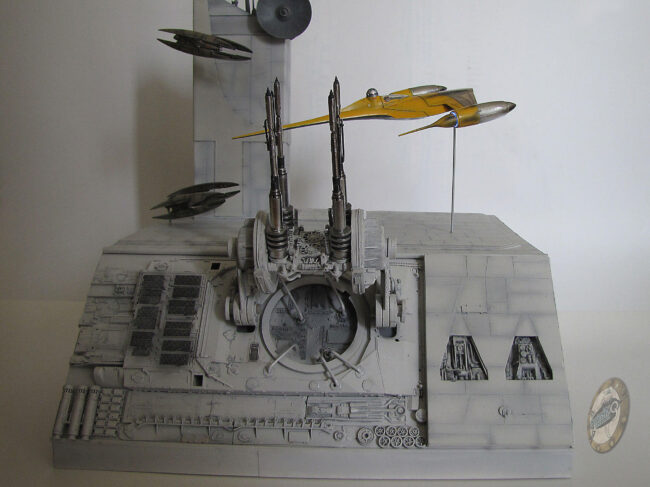 The first movie in chronoligical order, “The Phantom Menace” is certainly the less appreciated in the all saga. Well, “The Last Jedi” is also on the podium but for completely different reasons. However, even if the film directing and the acting performence of the main actors isn’t flawless (well, I guess that’s a lot for one single movie), I think the universe works well. The costumes, the decors and the vehicules are just perfect, especially during the final scene : the battle of Naboo. For this reason, I wanted to pay tribute to this movie despite its flaws.

During the battle of Naboo, the action is divided in four parts :

This splitting may be damagable to the dynamic of the film end : too less screen time for each. And it’s a shame for the space one because it shows very interesting models.

The main protagonist of the battle of Naboo : the Naboo N-1 fighter

The making of this model was pretty harsh. The choice of the kit was obvious. Only two AMT kits existed by this time : one plastic made, the other metal made. I chose the plastic one for practical reasons :

This is a very simplistic model as they were made at this time : no glue, no painting, less than a dozen parts to snap together. Of course I strongly improved it. Lets’ see how I did.

First I had to design the light up. Not easy, the current has to go through the very thin wings of the ship. I used two small brass rods swamped into the thickness of the wings. As we can see on the picture, I dug a trench with my Dremel, put the rods and re-filled it with putty.

Second problem, only a thin circular border of light is visible at the rear of the thrusters. First, I closed the thruster with a piece of tracing paper.

Then, the “rats tails” so distinctive were glued directly on the tracing paper. And here is the result :

I will not dwell on the paintjob and the cockpit detailing, very classical. Just one originality, the painting finish is gloss contrary to the usual Star Wars models.

Oddly, the gloss paintings must not be used. Too thick, they swamp details, stopper airbrushes and it is very hard to make a good weathering on them. Moreover, the tiniest sanding mistake is seen like a democrat militant in a NRA convention. So, mat painting covered with a lot of gloss varnish “klir“.

The chromed part is made with an Alclad slilver-chrom painting sprayed in several layers, more or less intense, depending on the area :

It seems that I haven’t talked about Alclad painting yet. They are very quality paintings used to obtain truly amazing metallic renderings.

You must absolutely use an airbrush, they are very fluid and very delicate once dry. For example, if you put yout finger on it, you can get a very nice fingerprint. Si if you do’nt want to get a “CSI : Miami” diorama, handle your models with gloves.

The Alcald paintings must be srpayed on a gloss black primer in very thin coatings. Just see here to get more details on the technics.

Now, this is podracing !

The droid fighters are very small, very simple to assemble (only 4 parts) but hard to light up. Indeed, I had to insert two LED’s, one for each eye. There is not much room to do that in the droid head and I had to spray many silver and black layers to hold back the light leaks.

Cuting the eyes was a delicate operation, the plastic is very thick here. The final reslut is satisfying :

The decor of the battle of Naboo

I chose for decor a section of the Lucrehulk cruiser of the Trade Federation. They are the huge ring-shaped ships used by the trade federation to lead the blocus of Naboo :

Not easy to identify a huge ship only by seeing a small section. So i chose two distincive elements : a parabolic antenna and a quadlaser battery.

I’ll only talk about the quadlaser, which was very fun to make. Indeed, it’s a nasty scratchbuil/kitbash with tank and various salvage parts, plastic card.

The base of the guns themselves are simply Pilot pens’ tubes. The spear is made from the guns of a Jedi fighter Actis Eta-2 model by Revell.

And the final result, after paintjob :

Finally, a comprehensie diorama, not really dealt with on the web. It allowed me to approach the prelogy which is still interesting to represent in modelism despite its cinematrographic flaws.

By the way, I got a third price in a Starship Modelers contest with this diorama. If I don’t congratulate myself, who will ?