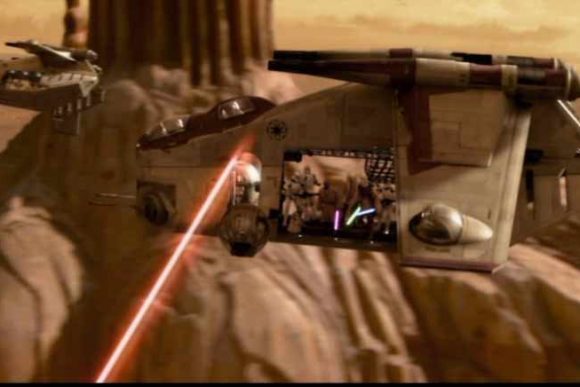 The count Dooku (a count, played by Christopher Lee, name written with “D” and K”… It took me a while to understand the reference) has just cought Obi-Wan Kenobi and Anakin Skywalker in order to execute them in the Geonosis great arena. A huge group of Jedi inflitrate the arena to stop the execution, just in time. However the fight turns badly and the Jedi get ass-kicked by several battle droids, which triggers the first battle of the Clone War : the battle of Geonosis.

This scene is an important one in the Star Wars saga. It’s the first time Jedi can be seen in a massive fight… and this is the first time we see the Jedi are not unerring as they had to be rescued by the clone army and to suffer heavy losses.

The battlefield is quickly mastered by the galactic Republic and his clones who take over control of the planet. This battle is also the first opportunity for to see the Republic gunships LAAT/i (Low Attitude Assault Transport/ infantery) and LAAT/c (Low Attitude Assault Transport/carrier). They are used to intervene directly in the arena, in the heat of the battle and by Obi-Wan and Anakin to lead the chase of count Dooku, escaping on his “space moped”.

Star Wars 2 suffers many failings including the story telling and the acting performance (too bad for a movie…). The battle scenes bring to mind an animated film, the movie doesn’t age well because of that. However, as a model maker, those gunship concept has always interested me. I find them both originals and well designed. 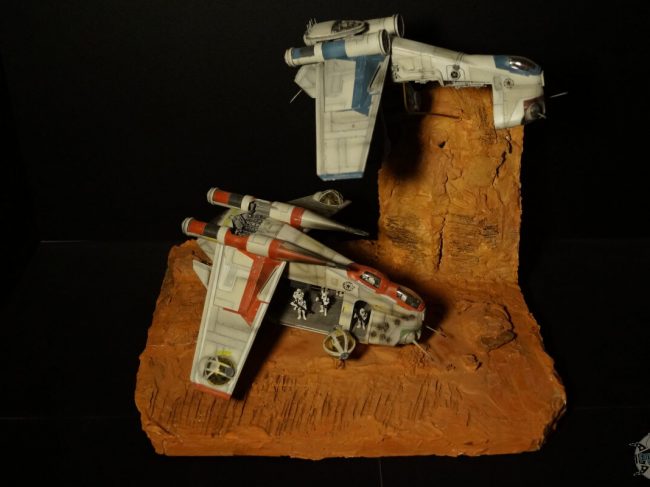 The diorama presents the two kind of gunship used by the Republic during the battle of Geonosis flying over a typical landscape of the planete : a rocky esplanade sprinkled by high rocky peaks. I pared down the scene on purpose, allowing the public to focus on the models. And then, the work was easier and faster, that’s why the pared-down style is very useful…

Oh no… A Revell model kit…

The kit I used, manufactured by Revell (“easy kit” series) originally represents the gunship seen in the Clone Wars animated series. This model kit series is still available and shows many issues including ships seen in the late Star Wars movies. If I can avoid those kits, I do because they are way too “toyish” but sometimes, I have no choice… They officially don’t need glue or paint but of course a serious work would require them.

The biggest problem of these kits is the lack of care with details and accuracy. Other problems occure with the fixation pins replacing the glue and the hinges intended for making the model a toy (doors and cockpit are to be opening) and they are equally annoying . Nice when you want to play with, a pain in the ass when you want to do make a realistic model. For both of the gunships, a superdetailing work is essential.

The same kit was used for the two gunships the Republic employed during the battle of Geonosis. I had to modify a little the LAAT/i, a lot more the LAAT/c. For the infantery model, the main addition has been the two side gun turrets.. The have been made from a transparent marbles blister. I often seek original forms wherever I go : cocktail shot glasses, coffee stirrers, blisters… Everything can potentially be usefull for model making. A model is almost never built “out of the box”.

The second gunship used for armored vehicles AT-TE transport has been heavily modified. I began by removing the bottom hull (designed for infantery transport) and replacing it by the typical pliers of the vehicle. The other heavy modification was the removal of the co-pilot compartment.

The LAAT/c is a one-manned ship. Styrene sheet was used to fill the empty space created by this removal. After adding the styrene sheet, I had to mastic and sand again and again to merge it into the ship hull. Finally, I added the upper module (com and detection I guess) made from recycled material and styrene sheets.

The decor, simple, representative sample of a Geonosis landscape has been made with plaster coating. The structure is made of polystyrene and wood. The support rods of the two sips are included in the coating. I presented this diorama only once, during Migennes Collector 2011.