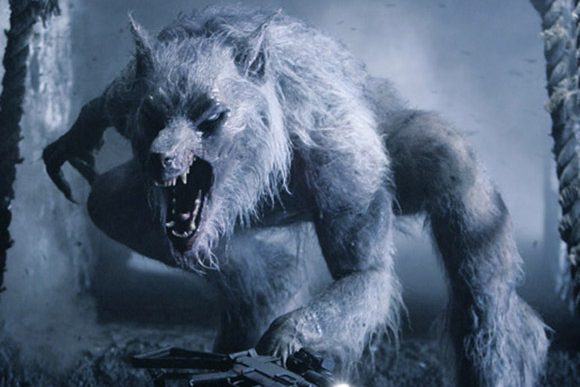 Hunted by her own people with Michael Corvin, Selene must defeat the last Elder’s leader, transformed into an hybrid being trying to free his brother William, a bloody lycan. She also finds out the truth about her own origins.

In this second movie of the saga Underworld featuring the beautiful all-leathered Selene, the lycan William comes out. William Corvinus is the original werewolf, the very first lycan ever been. He turned into an incontrollable beast after being biten by a wolf. His morphology is quite different from the others lycans’ with a longer muzzle and a lighter skin. He is also a tougher werewolf : despite a 800 years hibernation, he managed to stay on his feet after being shot dozen times.

Like every others lycans of the saga, William has been realized “live”, no CGI except for a few action scenes were the werewolf suit was not usable. The outfit features a very complex animatronic head allowing many facial animations, a complete suit recreating the lycan’s morphology the actor had to wear and many prothesis to make the actor taller and give his legs the proper aspect. 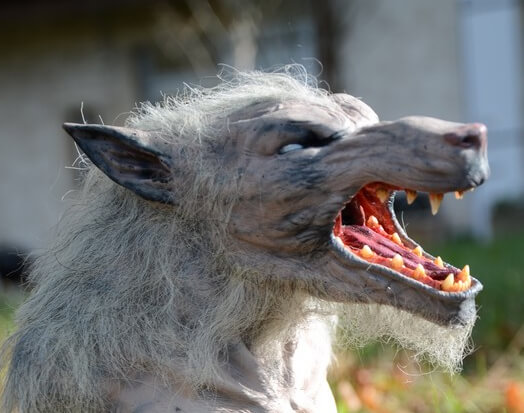 Born from a collaboration with a group of swiss collectors a few years ago, I managed to realize this 1:3 bust of the lycan William Corvinus from the movie “Underworld evolution“. This artwork was an interesting challenge since the bust had to be covered with “real” hair and not a sculpted hair on the surface.

For the first time I was trying a new sculpt matter, the “Chavant medium plastiline” used in the scupting professionnal circles.

Before starting the bust, I made a rough (sort of a sketch if you want) of the sculpting, at a smaller scale to determine the final pose.

After validation, I started the sculpt job using plastiline Chavant. After 3 dozen hours of work, the beast was finished.

Then I separated the sculpt in several pieces : ears, teeth and the rest of the bust.

The mold was made with silicon using a plaster layer to hold the stuff together. The resin is cast using the “rotational casting” technique. If you click on the link, you can see the technique is pretty physical. There are machines to do that mais they have to be built or bought and I had too few to make, so I went with my barehands.

After I took 10 cm more on each arm, the casts were ready. Then, : cleaning, brushing, drying and all I had to do more was putting the parts together.

In order to conceal the joins (even the smallest ones), I worked with Milliput putty. Once this is done, I throwed a primer layer to “read” the casts better : it usually reveals the smallest flaws.

Second to last step : the paint job. Willima Covinus the lycan is not an easy one to paint. His milky greyish skin is sprinckled with tiny veins and age spots. I spent many hours to paint the 7 copies, the first being the most difficult and long to paint.

Here we are now to the final step, the hair. After I gave up using my own (I’m pretty close to the wookies in this matter), I decided to use a wool crepe usually used to realize postiche mustaches and beards. The technique is simpler than you think. I begin by to glue the hair in the base in successive layers so that the upper layer hides the lower layers joins. The most difficult part is to hide the hair directly jointed to the skin. I spent almost half an hour for each bust making the hair.

Finishing stage to obtain unique copies of the lycan : blood in the maw, moisty hair…

After a few months, the lycans were finished and went to their owners, glad…