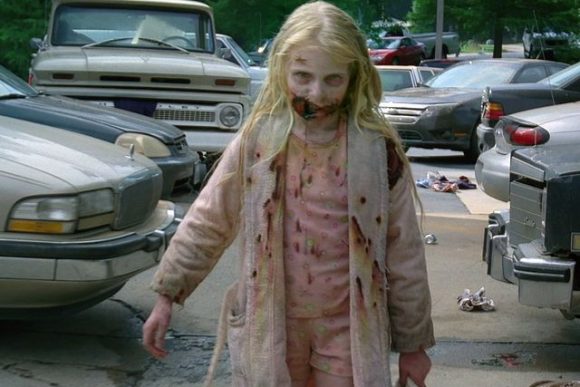 The Walking Dead is an horror TV series, adapted by Franck Darabont and Robert kirkman, the comics’ creator. It’s broadcast since October, the 31st, 2010 on AMC.

The story is about rick Grimes (performed by Andrew lincoln) who wakes up from a several weeks coma to find out that the population has been devastated by an unknown disease which turns humans to zombies called “walkers”. After he finds his family, he quickly becomes the leader of a survivors group from Atlanta. They’ll have to survive in post-apo world, facing the walkers and other survivors groups, some of them even more dangerous than the walkers themselves.

The three little grils this article is about are emblematic characters of the show : 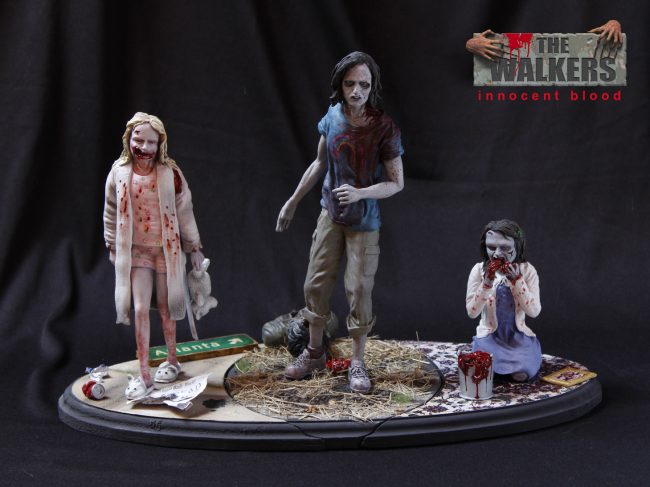 I made this artwork for a few collectors. They wanted to get a range of 1:6 dioramas from the Walking Dead TV series showing cult characters and/or scenes. Second work of this range named “the walkers”, I offered them the chilhood topic with three important zombified characters in the show :

Six dioramas and a single Teddy girl will be made. The project was to make a removable base in three parts. Each one of them featured an element of the scenery where the “walker”… is walking :

The main difficulty was to make the diorama with not too much gore. The childhood innocence had to be seen under the undead. A huge challenge because every little girl had to look exactly like the series character. That’s what we call “the likeness” in sculpting.

Each character has been made independently with supersulpey in several parts to facilitate the moulding made by my friend Cinémodèles créations.

Once the copies received, I removed the grease coat, assembled them and then sprayed a primer coat beofre really painting them. Several paint pots were made for each color to maintain a unity between every copy of the character.

The paint job was very long because of the small flowers of the Teddy’s pyjama and the rainbow on Sophia T-shirt.

Your garden is your friend

Once the paint job done, I had to make the three parts oval base. Solution ? Jigsaw and router (definitely NOT a Petersteven nick name in weird backrooms).

The decor elements are not attached so everyone can display his diorama as he wants.