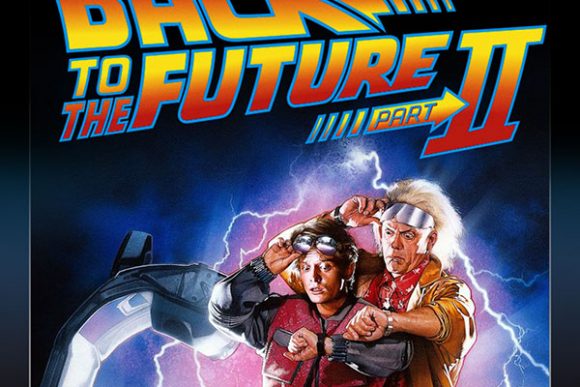 Back to the Future
part 2

Indeed, his dumbest among the dumbests son is getting ready to go in a hold-up which will destroy the entire McFly family. As we can figure out further in the movie, it wouldn’t really have been a shame considering the said family’s condition, anyway… So, in a hurry, Doc comes back from the future to involve Marty and put an end to the problem. I’ve always wondered why this is such a hurry, Marty could have taken the time to screw his grilfriend Jennifer along the lake and then do his job in 2015. But that’s it.

After many adventures in the future, in an alternative present where Donald Trump is the most powerful man in Hill Valley (non sense, a guy like Donald Trump would never become such a man in an advanced democracy as the United Stats) and in the past where Doc acts like a lightning rod and go the Far West time but this part is told in the 3rd movie.

This episode shows the DeLorean from all angles (even from below), much more than the first. Indeed, it’s flying. And that’s the genius idea. The first movie was a romantic comedy with a little SF inside, the second is pure SF with comedy moments. Well you may think that the difference is very thin but not so much. During the all movie we can feel the SF is everywhere : in each 2015 shot, as soon as the car is flying, games with times and parallel universes succeed each other…

This movie works perfectly, wich is not the case everytime with sequels. And it has been a pleasure to transofmr the DeLorean into a real spaceship. For the FX designers and for me as well. 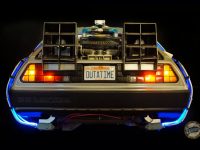 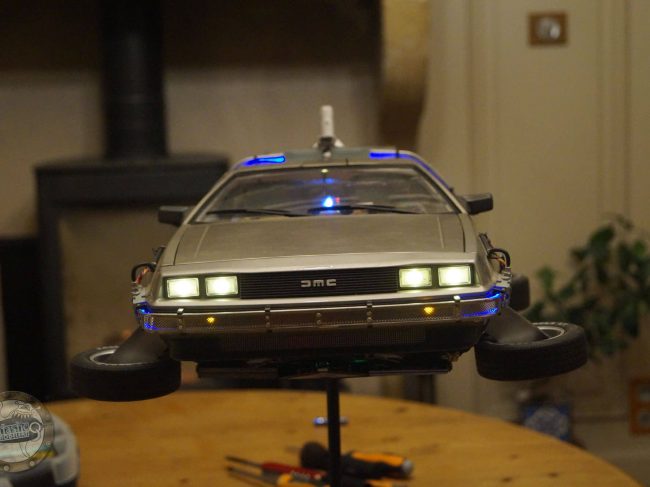 You already know all about my first post about the DeLorean by heart, here is the second one. This post is about the car evolution into the Flying DeLorean. Every big fan remembers the shock he experienced at the very end of the first Back to the Future when he saw the DeLorean taking off to travel to the future, 2015.

I got the idea to build a stand monted on a single brass rod. The stand had to show a proper representation of the underbody seen in the movie :

I couldn’t glue the underbody un der the car since I wanted it to feature the mark I DeLorean. The solution was to make the stand become the underbody as well.

The car is simply installed onto the stand, its weight serve as the glue. The stand is heavily detailed to feature the underbody seen in the movie. It is lighted and thus also electrified.

The current is brought to 4 connectors linked to the wheels when the car is upstairs. This is the main problem of the set-up : finding the connectors and connect them to the wheels.

The rod is just below the center of gravity of the car to avoid the car toppling. The joint is made with a huge amount of epoxy glue. In addition, the glue secures the electric wires.

The result, once the flying DeLorean in place :

The assembly of the wheels

The main modification is about the wheels inclination. Indeed, the vertical thrusters are inside the wheel’s hub and those have to tilt in flight.

The creators of the model from Eaglemoss anticpated th possibilty of tilting the wheels. The apparatus doing that is clever but unfortunately too far from the shooting model as you can see in the picture on the left. The wheels flap too low in relation too the underbody and the triangular metallic support is missing.

I had te redesign the apparatus. The main disadvantage is that I must totally unscrew each wheel (including the disc brake) to perform the transformation. Therefore I need 20 to 30 minutes to do it while I needed only a few seconds to do it with the original apparatus.

The next picture is a screenchot showing the tilt apparatus of the flying DeLorean :

We can easily see the triangular supports. Furthermoren the wheel are not as low as they are in the Eaglemoss model. Since I wanted to remake the all stuff, I decided to add the light inside the wheels to improve the rendering.

i bought a new 4-wheels bundle and made new supports for each one. Three DEL’s have been added, linked to a connector.

In order to position them, I attached some hooks (one for the aft wheels, two fir the rear ones) shown in the picture below.

Then, the wheel are attached directly on the original metallic part, once the car is on its stand.

The last huge improvement from the first episode’s model is the fusion generator, replacing the the 80’s nuclear reactor powered by plutonium.

The DeLorean designers made the Mr Fusion generator from a real 70’s electric coffee grinder for the purpose of the film. This device was already used in the first Alien movie in 1979.

No big deal with this one, only a screw concealing, the screws being too big for the scale. The holes where filled with putty and painted whit a gloss white paint.