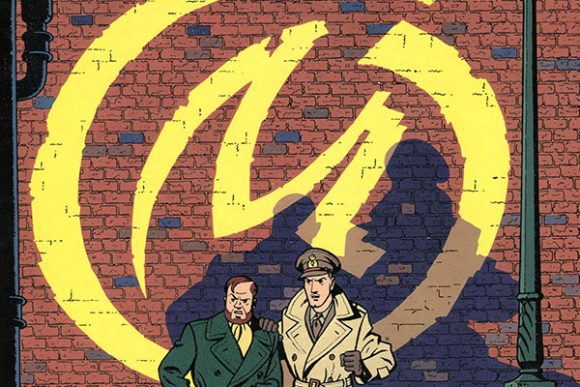 A friendly gay couple is involved in a dark jewel robery case in the late 40’s London. What ? You tell me Blake and Mortimer ar not gay maybe ? The never see or talk to a woman, live together in the same flat and are english men like Freddie Mercury and David Bowie. So, you see…

Sir Francis Blake, agent of the MI5, the english counterespionnage agency and Philip Mortimer, scientist specialist in… everything : aeronautics and naval engineering, , archeology, neurobiology, robotic, thoritical physics, general relativity… are confronted with the professor Septimus, megalomaniac who intends to dominate the human mind.

Our friendly and dynamic gay couple investigates to solve a complex case involving err… let’s guess… Olrik ? Bingo ! It’s always astonashing how the get surprise to find Olrik in their pathway while this is always the case since the secret of the Swordfish, their very first adventure. I even wonder if they are not a little bit dumb.

So, the professor Septimus managed to build a device that alows him to control Olrik’s mind and make him do such funny things as graffities everywhere, steal the british crown jewels and kidnap famous scientists. Well, I’m joking otherwise I get quickly bored but I really love this story which is on my mind one of the best comic story ever made.

The Blake and Mortimer comics are always more or less about 4 topics :

The yellow ‘M’ is the first Blake and Mortimer comic book featuring a real detective story, it completes the topic list the further books will use. It shows a remarquable narrative line, the twists are many and come one after another constantly. The end is very technological and remains one of the most astonashing I’ve ever read in comics. The very expressionist drawing , often monochromic, give the book a unique detective mood. 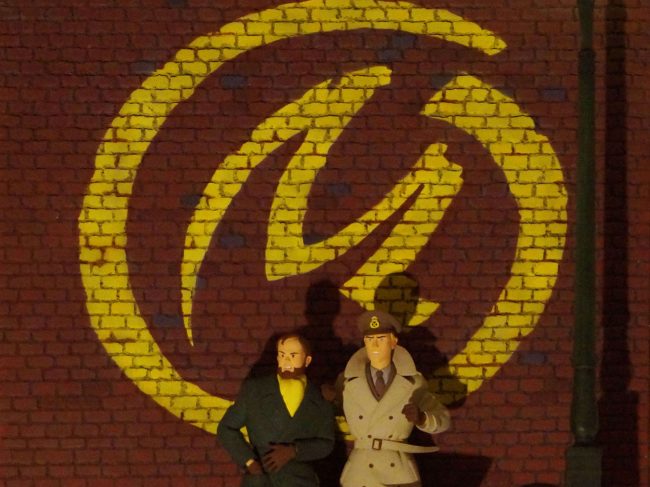 This diorama starts a new category : Comics. I wanted to recreate the cover of one of my favourite comic book : The Yellow ‘M’ frome Edgar P. Jacobs, a Blake and Mortimer adventure. This cover is well fitted for a diorama, it’s almost a 2D one. A huge wall, two characters against the wall and a few accessories : a street light, a basement window and a trash can. Each element has to be made since there is no kits in the market. In this article, I will explain how I made them, on by one.

The wall is representative of the diorama : it cannot be failed. I used a foam board to make it. It’s like polystyren. I found it in an hobby store.

I only engraved the bricks with an engraving tool, softly. The foam is very crumbly and easily workable. It was just a very long work.

The paint job is quite easy : Tamiya red brown on a black preshadding into the seals. Some bricks are grey-blue colored, as they are on the comic cover. The paint job is hand-maid, with an aerograph.

The most difficult work in this diorama is the yellow ‘M’ itself. Not easy since I am totally hopeless in drawing art. When art fails, science can manage so I appealed to my basic training : physics. I realized a projection of the yellow markn using a convergent lens.

The aim will be to cut a stencil into a plastic card and then paint the yellow ‘M’ directly threw the stencil.

First, I had to make the objet. That is the “thing” you want to make the image of. I scanned the yellow ‘M’ directly from the comic book, printed it onto a transparency, glued it on a glass slice and finally light it with a powerful lamp :

A little bit of calculation

Then I had to put the elements in place :

In physics, we know how to calculate these positions using the thin lens equation :

I needed another data : the magnification. That is the number the objet’s diameter has to be multiplicated to become the image’s diameter.

One interesting feature with the lens equation is that the magnification can apprear in it by the y/x quotient. After a few calculation, you come to this :

The number 10 represent the magnification so if you want onother, just substitute it by your number. These equations give the two positions we need if we know the focal length of the lens. The lens makers give it sometimes but most of the time, you’ll have to measure it by yourself. There are methods for that. Mine has 14,4 cm focal length so the final result is :

We find again the magnification of 10 (y/x) so the reslt is probably the good one. The size of the apparatus is x+y = 1,74 m. The result is the DIY you can see in the picture.

After drawing and cutting out, we obtain this very accurate stencil :

The last move is painting the yellow ‘M’ with an aerograph, firts in white then in yellow (the yellow painting is not covering enough).

The street lamp took quite a long time to be made. I built it like a kebab around a threaded rod which has the tripl advantage of stiffenning the structure, allowing to screw the elements in addition of gluing them and faciltating the ground fixation :

The red cable brings the light to the top LED, the reversed cuirrent go threw the rod itself (fourth advantage).

The strete lamp elements are scrathced using plastic card, a yellow LED is addes in the top light :

The trash can and the basement window

Here again, scrtachbuilt. The trash can has been made from a wrapping cylindre for a postera and styren rods. Teh basement window is sctratched from plastic card and photoecth grid :

This diorama is quite new so I showed it only two times :

I didn’t get the enthusiastic reception I expected, very few SF fans knows about Blake and mortimer. I’m getting old, I guess… So bit.

But I had a great pleasure doing this art work which allowed me to escape from my Star Wars mental jail (I got re-cought since). It inspired me others dioramas in the comics world. I’m thinking of making the cover of “Destinatin Moon” from Tintin but that’s another story…