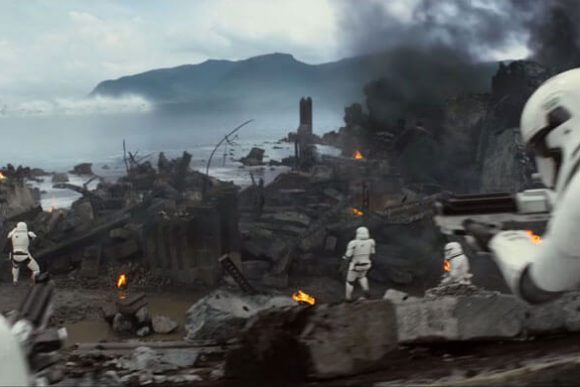 Han Solo, Rey and Finn have been identified in the castle of Maz Kanata by Bazine Netal, a First Order agent. However, the Resistance has introduced an agent in the castle too, a droid called GA-97. He’s been able to contact the resistance HQ which sent Blue and Black squadron lead by Poe Dameron.

The battle begins with the First Order’s Tie Fighters devastating the castle. Han and his fellows extract themselves from the ruins (they are heros and heros can’t get crushed by stones, that’s a sacred rule) and fight the ground troups. Eventually, some stormtroopers catch them. A stormtrooper never kills his enemy, he always try to catch him. And get killed when the enemy escapes, most of the time.

Deus ex machina, the Resistance X-Wings strike force arrives and shoots averything wearing a white suit. That’s the scene I wanted to feature in this diorama.

This is an important scene in the Star Wars saga. First, it introduces the Resistance which was only mentioned since the beginning of the movie. It shows Poe Dameron’s return, considered dead so far. It’s an incredible action scene for the X-Wings, 32 years after the Return of the Jedi. Last but not least, X-Wings (T70 and not T65) can be seen fighting into an atmosphere and not in space as usual. Great fan’s pleasure. 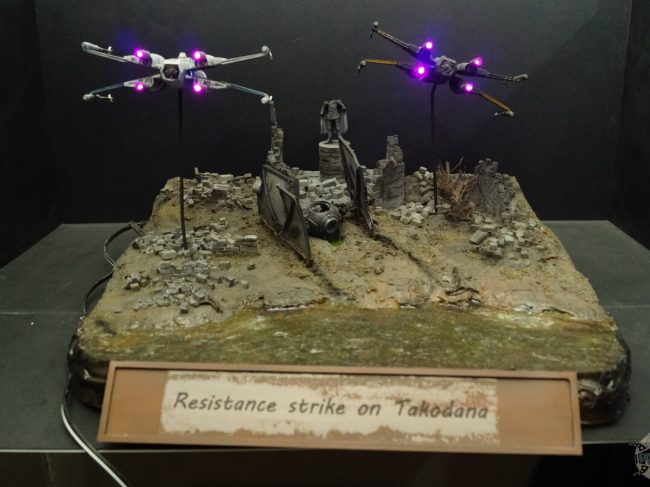 Since the first viewing of the movie, this battle of Takodana scene have alerted my model maker’s sixth sense. Quite annoying by the way. Everey time I watch a SF or war movie, I have hard time to go into the story itself. My mind can’t resist analyzing decors and vehicules ; I always wonder how I could kitbash this, scratch that… Don’t make the same mistake as me, don’t go into modeling, modeling is the devil. Just place an order instead, so you will keep a peacefull mind 🙂 . Anyway, this scene awoke (the Force) my diorama desire, and that’s a good thing.

A medieval castle in Star Wars ?

I found it weird too, on the first time. But after all, every one wanted newness, here it is. In Star Wars, we already had western, epic, space opera, why not a stone castle ? It might have at least inspired me.

A couple of years ago, someone gave me parts from a collection “Buil the middle-age”. I had many sachets full of real small stones which would fit very well in this diorama. The stones were correctly glued and painted to look like Maz’s ruined castle. And this was very cheap as it was recycling.

Making water in a diorama is a recurrent problem. I wanted to do so to feature the lake next to which the battle of Takodana occurs. By the way, some people see in that scene a reminder of the Arthurian legend : Maz Kanata is the Lady of the Lake giving the magic sword (Excalibur – Luke’s lightsaber) to the unknown hero (Arthur – Rey). I like this way of viewing.

So, I had to make realistic water. Many techniques can be used to do so. My favourite is the inclusion resin you can find in DIY stores. The resin is usally used to make very nice stuff like bookend with pretty flower included. Once the resin is polymerized (and not “dry”), wich takes a few days, I covered it with medium acrylic. The medium becomes totally transparent when drying and allows to “sculpt” the water surface.

The scene features a ravaged soil, the ground is turned like a WW1 no-man’s land. To make this, I used a preparation including water, white glue and sawdust. The preparation is distempered on the all surface. Once it’s dry and painted with several shade of brown, the “burnt soil” effect is quite convincing.

The ships involved in the battle of Takodana

In addition to the resistance T70 X-Wings, I had to feature the First Order. Instead of a flying Tie fighter which would have made the scene too heavy, I decided to crush one on the floor. I never enjoy destroying a model (well in fact, maybe I do somehow…). I always hesitate a bit… and then I go frankly.

The most difficult part was to glue one by one all the tiny steel wires to simulate the solar panel torn by laser blasts and the ground crash. How many time spent my eyes fixed on my binocular magnifier… On day, if you are nice guys, I’ll show you my face with my magnifier… And one wonders why model makers can’t get a girl… The fuel leak is made with the same resin I used for the water, green-yellow colored.

I exposed this diorama three times :

I’m not done with episode VII, I intend to realize the Poe Dameron and Finn’ escape onboard a Spec Force Tie Fighter (the one with the red pattern) but it’s another story…