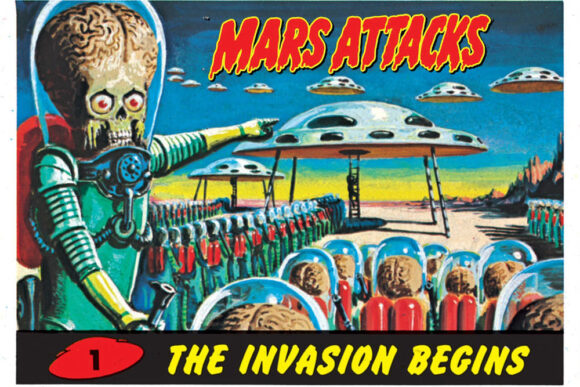 Thanks to the fim makerTim Burton, the licence Mars Attacks came out. Based on a Tradings cards serial released in 1962 in the United States, the movie, on screen in 1996 didn’t have the success it deserved, specialy in the US. Its release in France was also eclipsed by its direct opponent : Independance Day, more conventional and politically correct, hitting a bigger audience.

For me, Mars Attacks was a revelation. Small hideous martians, directly out of a 50’s SF B movie, with no complexe, lustful, just on earth to have fun with human race, it was just sweet candies to me.

In short, I was sold, so fan that i came up with a cosplay a few months later ‘among other things). i began to collect trading cards, figs, etc…

The licence became worship because of the movie and made a direct hit into the geek culture. Many by-products came out : comics, board game, card game, new trading cards illustrated by the most famous US illustratirs etc. 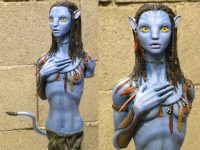 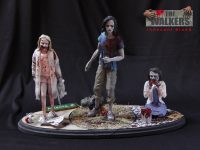 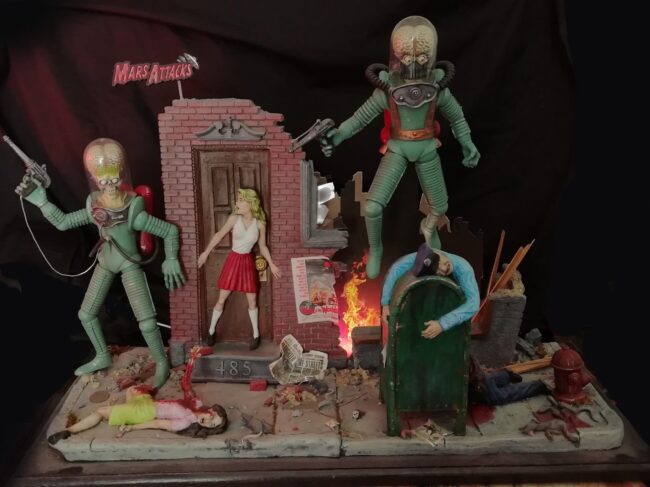 I got the holly Graal in 2019. Two kits from the former company Screamin specialized in vinyl kits : horror, fantastic and SF characters. But I had a real problem : I had no time to make any new diorama for years, where could I find the time to ?

As if by chance, a new phenomenon occured and allowed me to spend two months between March and May 2020. Things aren’t going well ? Let’s g for a Mars attacks diorama.

Presentation of the kit

The first part of this kit is called “No place to hide”. it features un young woman hiding from a martian while her friend is dying on the ground, partially squashed.

The second part intitled “Slaughter in the streets” (a very full agenda) featuring a flying martian, a cop and a dog. the dog is cut in the half and both have guts spread on the floor. Look at the details on the cop hanging on the mailbox while the rest of his body is spreading on the ground.

Very well-known during the 80’s, vinyl kits were not made of LP discs recycled and melted as conventional wisdom suggests. Vinyl is a pretty flexible matter requiring a very specific work. I invite you to watch my friend’s video featuring a vinyl kit.

With those kits, things got even funnier because we can find both vinyl and low-quality resin parts.

After cleaning the kit with hot water and soap, the different parts are glued together on big wooden board. The diorama is 60cm width.

The vinyl can be softened using hot water or an hair dryer. Then you can give it the wanted shape. The ground of the diorama is strongly attached on the board so the small parts can keep their shape. With bigger parts (the Star Wars Rancor for example), you’ll have to use a metallic structure and a polyurethan foam. It is a great deal to use thie foam because it’s light and hard at the same time so the model can keep its shape easily.

As I said before, martian are made od different matters. Members are resin made but a single spot of cyano glue is not enough. They must be reinforced with metal rods to be sure the character stands correctly and don’t fall appart later. Every member is drilled at the edge and a rod is sot into the hole to assemble and stiffen the pieces.

And that’s it, the body newly assembled. The head is phosphorescent but once painted, this is completely useless. The bust is made in the same matter. Only the legs are resin made and must be sanded and retouched because the draws isn’t totaly flawless.

The martian stands well as you can see on the picture. The kit designers can be congratulated as they thought to equip him with kneecaps. So we can choose how to place him without endless modifications.

We come in peace

So, first encounter between martains and humans. A grey underlayer have ben sprayed on the decor far a better readability. The second reason is that the acrylic paint I use is incompatible with vinyl.

Martians are in place. The one flying doesn’t stand still. He is too far from the ground and the rod curves. He tilts like a big sea lion beer-drunk (french expression, untranslatable). As for his fellow, I wanted him to snake behing the wall. Well, the easiest part is now done.

No arms, no chocolate (another french expression…)

Well. i forgat this detail. The girl’s arm half melted on the floor is hugly. As if by chance, resin made.

Digital sculpture and 3D printing to the rescue. They are the new modelist’s friends.

Paintbrushes will be hot…

Last step wich is going to bring the diorama to life, the paintjob is an essential part of a diorama. You may have the most astonashing decor, if your little nephew Kevin, 2 years old do the paintjob, everything is good for garbage.

On this diorama, we may have a lot of fun :

As for painting technics, nothing very original. Acrlic paints I use for decades now : Liquitex and paintbrushes. the only issue were the encrusted characters. usually, we can turn the piece in your hand but this time, I had to turn around the decor.

The Mars attacks diorama is coming to an end (so is the first confinement). But there is still many work to do. Additional details must be added. Bricks here and there, grass, stones, ruins, magazines and 50’s papers…

Many little things that brings the decor to life. I also decided to add a background featuring an illustration of a ruin on fire. This background fills the void in this section of the diorama and allows to use a shorter rod to sustain the flying martian.

For conclusion, I’d say I spent a huge amont of time on this diorama. Good thing, I had plenty of time. Despite the few flaws of these kits, their nostalgic look and their oringinality are no longer seen nowdays. It’s a shame that a brand like Screamin non longer exists. It was the perfect mix between the garage kit and the licenced one.

Tnaks to internet and the abundant e-commerce websites, we can easily get those collector kits. The only cloud in the horizon is the price wich became unfortunately totally crazy for some of those kits.